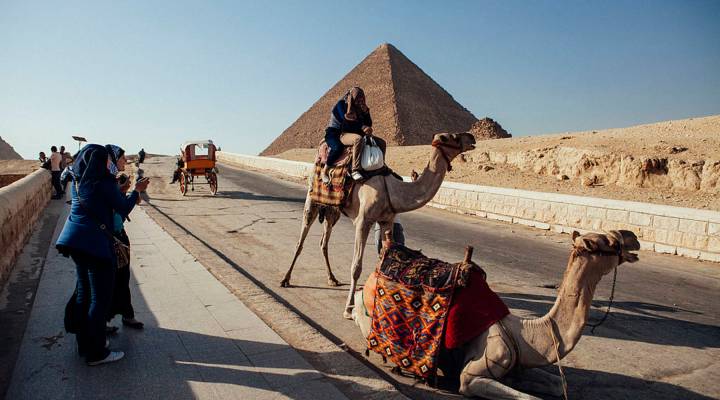 COPY
A group of tourists ride a camel at the Pyramids of Giza compound on October 21, 2013 in Cairo, Egypt. Ed Giles/Getty Images

A group of tourists ride a camel at the Pyramids of Giza compound on October 21, 2013 in Cairo, Egypt. Ed Giles/Getty Images
Listen Now

Egyptian and French officials are still sorting out what brought down Egypt Air flight 804 on Thursday. Families are mourning their lost love ones as Egypt braces for the broader effects of the accident.

Eleven percent of Egypt’s GDP is tied up in tourism, and the sector has been struggling.  Since the 2011 revolution, multiple — often violent — changes of government, terrorism and now two recent plane accidents are keeping tourists away.

Mohamed el-Fouly runs the tour company Mateegi based in Cairo. He said once you get tourists to Egypt, it’s getting harder to show them a good time.

“When you go to a place that’s usually packed with people from all over the world, and you would go there and find yourself the only occupied room in the hotel, it’s pretty depressing,” he said.

El-Fouly’s business focuses mostly on domestic and eco-tourism, which is still a struggle in the current economy.

Helen Marano is with the World Travel and Tourism Council, which looks at the economic impact of global tourism. She said since the revolution, Egypt has lost about 30 percent of its tourists.

“It’s 11 percent of their employment or 2.6 million [people] directly employed in this industry for them — so it is a substantial core of their economic well-being,” she said.

And she said while global tourism is doing just fine, tourism is to Egypt down about 50 percent in the first couple of months of the year.

“We’re seeing a continued resilience to the industry,” she said. “But for Egypt, our hearts are all going out …  just seeing one particular destination take on so much in such a short period of time.

Steven Cook is with the Council on Foreign Relations, and arrived on Wednesday on the very same plane that later crashed.

“As soon as I came in and saw friends, they were saying how optimistic they were that the tourists were coming back,” he said. “And then, within a number of hours, we have this tragedy with Egypt Air, and since then, people are saying that they are expecting to continue to struggle if not get worse, because they were starting to see an uptick in tourism.”

Some groups have still been coming, like Russians and tourists from Arab Gulf countries. But European and American tourists have held back. Cook said with dangerously low foreign currency reserves, over a hundred shuttered hotels and thousands of lost jobs, Egypt really needs a good tourism season this year.

“The reverberations are going to go on for quite some time,” said Cook. “It’s another blow, and you have to wonder how many more blows Egypt can take.”