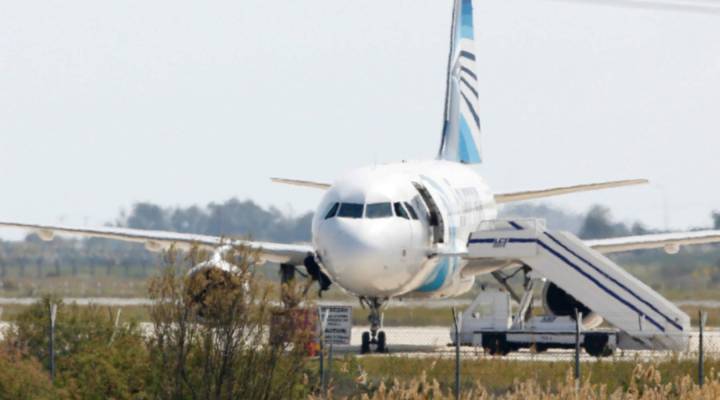 A man climbs out of the cockpit window of an EgyptAir Airbus A-320 parked at the tarmac of Larnaca airport after it was hijacked and diverted to Cyprus on March 29, 2016.  BEHROUZ MEHRI/AFP/Getty Images

A man climbs out of the cockpit window of an EgyptAir Airbus A-320 parked at the tarmac of Larnaca airport after it was hijacked and diverted to Cyprus on March 29, 2016.  BEHROUZ MEHRI/AFP/Getty Images

The hijacking of a domestic Egyptian flight that forced it to divert to Larnaca airport in Cyprus has ended with all hostages being released and the hijacker surrendering.

EgyptAir Flight MS181 was taken over by a passenger claiming to be wearing a suicide explosive belt.

After a morning of tension, the hijacker was seen walking down the steps of the aircraft with his hands raised.

Some reports said the Egyptian man – named by Cypriot officials as Seif Eldin Mustafa – wanted to talk to his estranged Cypriot wife who lives on the Mediterranean island, while others said he was seeking the release of female prisoners in Egypt.

The Cypriot president insisted that the hijack was not terrorism-related.

The hijacker’s surrender came shortly after several people were seen fleeing the aircraft. One – apparently a crew member – escaped by climbing out of the aircraft’s cockpit window.

In a tweet, the Cypriot foreign ministry confirmed the end of the crisis: “It’s over. The hijacker arrested.”

Throughout the morning, people had been seen leaving the aircraft after appearing to have been released.

Local media reports said the hijacker had handed over a four-page letter in Arabic after the plane landed at Larnaca on Tuesday morning, and that later a woman thought to be his wife had arrived at the airport.

Earlier, Cypriot President Nicos Anastasiades had responded to a reporter’s question about whether the hijacker was motivated by romance, by laughing and saying: “Always there is a woman involved.”

EgyptAir said the Airbus A320 was carrying 56 passengers from Alexandria to Cairo, along with six crew and a security official. It had initially said 81 passengers were on board.

A statement from Egypt’s civil aviation ministry said 26 foreign passengers were on board, including eight Americans, four Britons, four Dutch citizens, two Belgians, two Greeks, a French national, an Italian and a Syrian.

Larnaca airport, on the south coast of Cyprus, has been closed and scheduled flights diverted elsewhere.