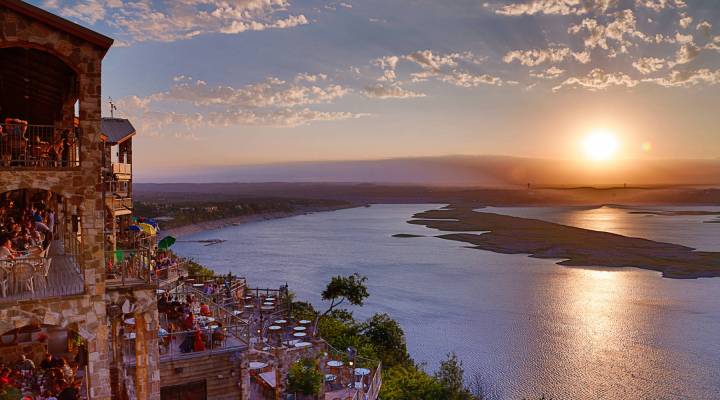 COPY
From 2010 to 2015, Texas faced a severe drought. Lake Travis was down to one-third of its water levels.  The Oasis

From 2010 to 2015, Texas faced a severe drought. Lake Travis was down to one-third of its water levels.  The Oasis
Listen Now

In Central Texas, the lifeblood of outdoor activity is Lake Travis, a reservoir on the Colorado River that runs through Austin. The lake is just as popular with tourists as it is with locals, who take to its waters to cool off in the heat of Texas summers.

On a Sunday evening in early April, the weather outside is a breezy 70 degrees. The Oasis on Lake Travis has a one-and-a-half hour wait. There’s a live band, and the restaurant’s four decks are packed with customers overlooking the water, waiting for the oncoming sunset.

Customers at the Oasis watch the sun set over Lake Travis in April.

But five years ago, the scene looked much different. From 2010 to 2015, Texas suffered one of the worst droughts in its history. During that time, Lake Travis dropped to one-third of its level. For a restaurant that offers lakeside dining, the view of a barren lake with islands sprinkled throughout wasn’t exactly what they were advertising.

“In late 2010 is when we started to see the sales decline directly correlated to the lake levels,” said Jacob Hart, assistant general manager at the Oasis.

Sales at the Oasis were down 10 to 20 percent throughout the drought. That meant drastic cuts, like seating only in certain sections and laying people off. While the Oasis managed to stay afloat, many businesses closed their doors for good – some that had been there for decades.

“We definitely got creative with how to spin the view,” Hart said. “At one point we even joked that even if it became completely dried up, it’d be like the Grand Canyon view.”

Around the corner from the Oasis, Todd Kahler manages the Marshall Ford Marina. During the drought, the cove got so dry that they couldn’t launch boats off their ramps anymore. Instead, they began to trailer them in, which meant extra labor and expenses.

“It’s going to take us many, many years to recover everything that we lost in the low water situation,” Kahler said. “It was definitely a battle.”

But last year, the drought broke with a vengeance. There were record-setting rains and Lake Travis rose more than 30 feet in 30 days. This spring, Austin got some more good news: for the first time in six years, Lake Travis is full.

The restaurant’s decks overlooking Lake Travis, some minutes after the sun sets.

And business is thriving again. New restaurants have popped up, and the Oasis is setting records against previous years.

“I would say we’re back to how it was,” Hart said. “We did a really good job of budgeting. I think we’re doing better than we’ve ever had in the 34 years that we’ve been out here.”