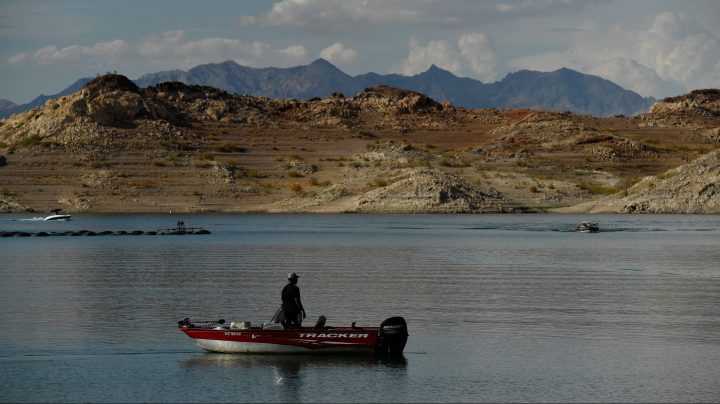 With at least 86% of the American West experiencing “severe” drought conditions right now, water levels on Lake Mead and Lake Powell — reservoirs along the Colorado River — have fallen to historic lows.

Lake Mead, an important source of water and hydropower for Western states, is also vital to the tourist-dependent businesses that surround it.

“Marketplace” host Kai Ryssdal spoke with Lisa Duncan, general manager of Temple Bar Marina, which is operated by Guest Services Inc., about how Lake Mead’s water level is affecting the business at Temple Bar. The following is an edited transcript of their conversation:

Kai Ryssdal: Hey, so look, did we catch you in your office by any chance?

Lisa Duncan: Yes, I am in my office.

Ryssdal: Do you have windows in your office?

Ryssdal: Good. Look out and tell me what you see out on Lake Mead there.

Duncan: Oh, it’s a beautiful day. We’ve got clouds. I see the temple [a rock formation] — that’s what we’re named after — and it’s just a beautiful day on the lake.

Ryssdal: The catch, of course, is that there’s not a whole lot of water in the lake now. Right? And can you see that from where you are?

Duncan: Oh, I can see that. We have the whole bathtub ring. Yeah, the water keeps dropping, so we just keep getting more and more of the white.

Ryssdal: So what’s that doing to you as you’re trying to run a marina on a lake where, you know, the water’s going away?

Duncan: Well, it’s been really hard. We were doing OK, up until the point the water got so low that we had to close the launch ramp, which has then just impacted the motel, the restaurant, our retail store. On the bright side, though, lots of people put in early into the water, so I only have one slip left available at my marina to rent.

Ryssdal: That’s interesting. People saw it coming that it was going to be tricky to get into the water, and they came early, basically.

Duncan: They did. By April, all my smaller slips were taken. All I had left as of last week was a 70-foot slip. You have to have a pretty big boat to want that one.

Ryssdal: I was gonna say, if you’ve got a boat that fits in a 70-foot slip, you’ve got other issues. So what does this mean for your business? I mean, it does not sound sustainable to be running a marina on a lake that’s in the kind of stress that Lake Mead is.

Duncan: Yeah, you know, it’s really hard. We work closely with the National Park [Service], and they’re looking at ways to extend the launch ramp. Fingers crossed, maybe they can do something, but I just don’t see it for this season. We’re really hoping next season, we can get that launch ramp and get that taken care of, but yeah, it’s a tough season this year. If it wasn’t for the marina floating us — so to speak — without that marina business, we’d be really hurting.

Ryssdal: Right. So all of which is to say, you’re kind of at nature’s mercy here. I suppose as we all are, but you more than most.

Duncan: We are. I keep saying that nature is trying to take back the river. She doesn’t want a lake anymore.

Ryssdal: Yeah. Full disclosure: We were supposed to do this interview the other day, but you got jammed up in part because you had some people quit. Do you find people leaving and sort of seeing the handwriting on the wall and saying, “This is going to be tricky for me to stay?”

Duncan: Yeah, it is. Everybody [who has] been leaving [is] our food and beverage [employees], because the restaurant is just not busy. So they’re taking other seasonal jobs and moving on.

Ryssdal: I was reading an article in the Los Angeles Times the other day about Lake Mead and the problems you all are having — which is why we’re on the phone with you — but I came across a word that kind of hit me really hard: What’s going on out here now is not a drought, right? It’s ”aridification.” It’s just getting drier and drier and drier out here in the West.

Duncan: I mean, this is 20 years of the lake dropping and dropping. We’re basically at the mercy of how much snow the Rockies get and, if they keep getting the snowpacks they’ve been getting, we’ll just keep dropping.

Ryssdal: So let me ask you this, and I hate to end on a downer, but how much longer can you be in business at the Temple Bar Marina?

Duncan: That’s a good question. A lot of it’s contingent on getting the launch ramp. If we have a launch ramp, people are going to come because it’s still a huge lake. [But] without the launch ramp, it’s really hard on us.