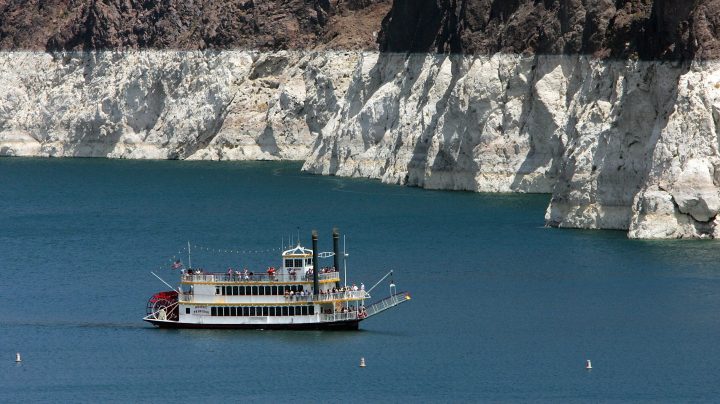 COPY
If water on a lake is too low, boats can't go from one side to the other smoothly. "The Fed is basically adding some water in that lake to keep the liquidity — or to keep the water — from completely drying out,” says Yiming Ma of Columbia Business School. Ethan Miller via Getty Images
Kai Explains

If water on a lake is too low, boats can't go from one side to the other smoothly. "The Fed is basically adding some water in that lake to keep the liquidity — or to keep the water — from completely drying out,” says Yiming Ma of Columbia Business School. Ethan Miller via Getty Images
Listen Now

When Federal Reserve Chair Jay Powell delivers his semiannual report to Congress on the state of monetary policy this week, one topic that will likely come up is the Fed’s $120 billion per month bond-buying program.

“In a bad time, such as in the COVID crisis, the Fed did a lot of things to improve the liquidity conditions in the economy,” said Yiming Ma, assistant professor of finance at Columbia Business School.

One of those things was buying up large amounts of bonds in a strategy called quantitative easing.

Picture a lake in a drought

“So think of a lake that is near[ly] dried out,” Ma said. “Boats on the lake have to be able to get around, right? So if the water level is too low, then it just does not function smoothly for boats to go from one side to the other.”

The economy needs liquidity so that companies can borrow money to invest in new projects, conduct business and hire people so they can grow. The Fed’s crisis bond-buying injects liquidity into the economy by making money flow a little easier.

“The Fed is basically adding some water in that lake to keep the liquidity — or to keep the water — from completely drying out,” Ma said. “And I think the key is just to think about how we can get back a bit to where we were without shocking the market.”

The Federal Reserve has not yet given an official timeline for “tapering” or slowing down its bond purchases, but given the strength of the economic recovery thus far and concerns over rising inflation, officials have signaled they’re ready to start discussing a plan.

“If there’s naturally a lot of rain already, then there’s the chance of the lake overflowing, and that obviously is very bad for the lake, for the boats, for everybody,” Ma said. “But now if suddenly the Fed is drawing support, that might scare everyone, because they don’t know if suddenly the adding of the water stops, if there’s still going to be enough water in the system. And so no one goes out on the boat, and no one trusts the lake anymore.”

That’s why Federal Reserve officials have made it clear that they plan to move slowly as they make plans to taper the bond-buying program.

“Because sometimes people’s reaction, the fear in the market is also something that can make the systems stop working,” Ma said.