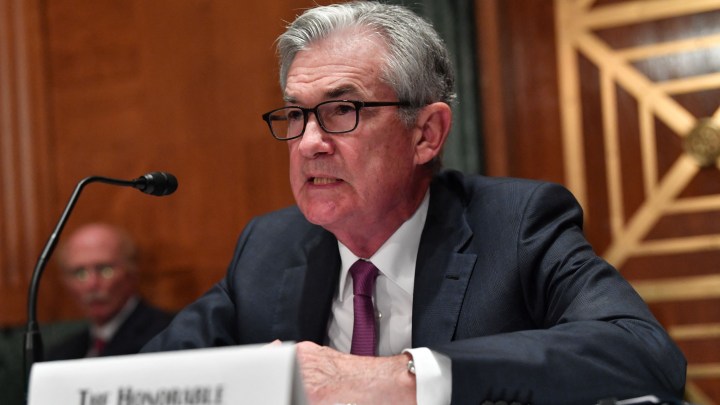 COPY
Federal Reserve Chairman Jerome Powell speaks in July. The central bank has been communicating about eventually tapering its bond purchases so the markets will be prepared when it starts. Nicholas Kamm via Getty Images

Federal Reserve Chairman Jerome Powell speaks in July. The central bank has been communicating about eventually tapering its bond purchases so the markets will be prepared when it starts. Nicholas Kamm via Getty Images
Listen Now

The Federal Reserve has been talking about tapering, it seems, endlessly these past months. “Tapering” refers to the gradual slowing down of purchases of securities and bonds — a slowdown, that, the Fed says, will begin at some point soon.

But why should we care?

In March 2020, lockdowns came to the U.S., as did an overwhelming sense of anxiety.

“Markets were not functioning very well,” said Randy Kroszner, a former Fed governor and an economics professor at the University of Chicago. “There was so much tumult that the Fed felt it needed to make sure the pandemic health crisis didn’t turn into a financial crisis.”

So, the Fed basically started printing money and using it to buy bonds.

“Billions of dollars a month of Treasury bonds and $40 billion a month in mortgage-backed securities,” said Ken Kuttner, a professor of economics at Williams College.

That is, $120 billion a month, every month, to this day, basically artificially propping up the price of bonds. But of all things to prop up, why bonds?

“The intention was to push down long-term interest rates,” Kuttner said.

“Lower the borrowing costs of households on their mortgages, for example, and lower the costs of corporations to borrow by issuing their debt,” Kuttner said.

This whole operation has kept a lot of people’s mortgage rates down and has been keeping some companies afloat. It’s been a fire hose on the financial fire of this pandemic.

And soon, it’s going to start to turn off.

“People should care because there are effects on the economy if it is done incorrectly,” said Eric Stein, chief investment officer for fixed income at Eaton Vance.

The Fed doesn’t want to abandon a fragile economy too soon. The last time the Fed tapered off this kind of stimulus, markets were caught off guard and had a meltdown some called a taper tantrum. The Fed has to shut off the faucet eventually, though, or it could risk serious inflation.

So it’s been talking about it — a lot.

“They don’t want to spook the market, and they’re not entirely sure about the pace of the economic recovery,” Stein said. “And I think that’s what’s leading to this back-and-forth talking about talking about tapering.”

Turn off the fire hose too soon, and the fire’s not out. Turn it off too late, and you flood the neighborhood. That’s why we care about tapering.