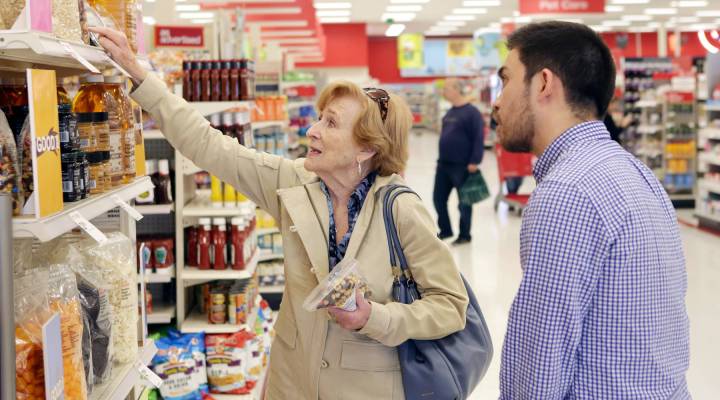 Megan Wolowicz seemed a little puzzled by all the attention she was getting in the produce section of a Target store in Edina, Minnesota, a few weeks ago.

“I just came over here to get something for lunch,” she said sheepishly, as a Target employee, Seijen Takamura, studied how Wolowicz responded to signs above the raspberries and strawberries.

Takamura is the lead designer with the Food + Future coLab, a collaboration between Target, the design firm IDEO and the MIT Media Lab. In recent weeks, the team has done a number of experiments in Boston, San Francisco and Edina, including the one Wolowicz became part of.

A Target shopper assesses strawberries that arrived at the store a week earlier and were discounted to reflect that.

“Tell me how that influenced what you’re looking at, if at all?” Takamura asked. He was trying to discern whether shoppers are more compelled by freshness or price.

Wolowicz went for the older berries, “just for the fact that they would be a little sweeter and would have a little more time to ripen.”

For shopper Betty Johnson, the opposite was true. “I would never buy the raspberries that are a week old because they spoil so quickly,” she said.

Meanwhile, Emmy Schmidt, a working mom, only cared about the price. “I didn’t really look at the date, to be honest,” she said. “I looked at the 50 cents off.”

Target is betting that making sense of these different answers will help it distinguish its $20 billion grocery business, which accounts for about a quarter of sales.

“It’s already a sizeable book of business,” said Casey Carl, Target’s chief strategy and innovation officer. “We need to understand and look more effectively around corners at what’s coming, and figure out how to create opportunity in that.”

Amy Koo, Kantar Retail’s Target analyst, said Target is devoting a lot of resources to grocery today following some stumbles in the past, which marred it.

“They were often out of stock, or items weren’t as fresh as they should be for guests,” Koo said. “But they’re really trying to turn the page on this.”

Koo said she was somewhat surprised, though, that Target is testing out so many concepts without fully developing them and hopes the retailer doesn’t draw firm conclusions yet from the experiments.

Another test in the Edina store involved using transparent packaging for some food items. Those same items also had their ingredient listed on the front, instead of the back, of the packages.

Target is developing a smart scale that would allow shoppers to learn about the farming practices used to produce various items.

One advantage to shoppers is they can see which foods, like cheese balls, have lots of highly processed ingredients. However, the clear packaging had the uncanny effect of making the not-so-healthy cheese balls look extremely appealing.

Another test involved a so-called food transparency scale, or smart scale. It looks like a real scale on which customers can set food items. Then a menu comes up, showing different categories of information one might want to have about the food product in question, including freshness, the production and storage chemicals used, the animal welfare practices employed in its production, and things like GMO status.

During the tests at the Edina store, the mock-up scale didn’t actually provide any information. The researchers simply wanted to observe what kinds of information shoppers sought when touching the screen.

Target’s entrepreneur-in-residence, Greg Shewmaker, said the smart scale will work properly only once the team has developed a food fingerprint database by means of scanning items. It involves a technology called spectroscopy.

“We’re building what we think is the world’s first food fingerprint database,” he said. “We’re taking millions and millions of scans of fresh foods, from produce to dairy to meats.”

Shewmaker said it remains to be seen whether the smart scale is the best vehicle for presenting that information.

Correction: A previous version of this story misspelled Greg Shewmaker’s name. The text has been updated.