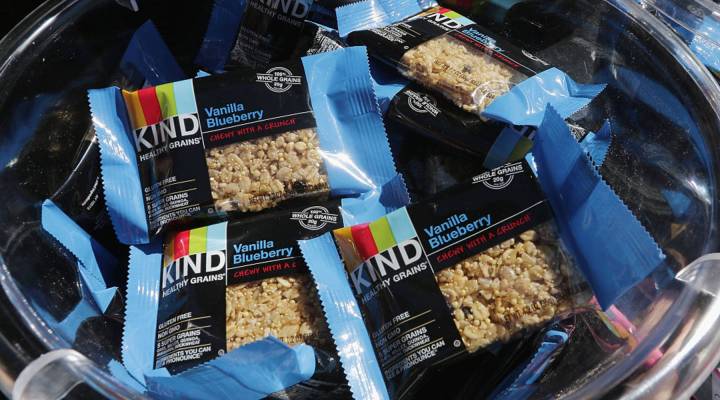 COPY
Kind bars were the subject of discussion recently when it came down to the semantics of what can be labeled as "healthy" per FDA rules.  John Parra/Getty Images for SOBEWFF®

Kind bars were the subject of discussion recently when it came down to the semantics of what can be labeled as "healthy" per FDA rules.  John Parra/Getty Images for SOBEWFF®
Listen Now

The past several versions of dietary guidelines have told us to eat foods like nuts and seeds, because they’re good for us. But those same foods are high in fat. And, the FDA’s regulations limit how much fat we should eat.

Notes Katz, there’s another problem too.

“The regulations that FDA has now not only preclude calling almonds and walnuts and avocados healthy but they would allow for calling some things that we know to be junk, healthy,” he said.

A statement released today by the FDA says “we believe now is an opportune time to reevaluate regulations concerning nutrient content claims, generally, including the term “healthy.“‘ Translate the fine print and the FDA seems to think now is a good time to reevaluate. And Katz agrees. Updating the definition of healthy will help consumers to be healthier and businesses to sell healthier food, he said.

However, Emily Balsamo an analyst covering food and nutrition for the research firm Euromonitor International, said even if the FDA does update its definition of healthy it may not have a high calorie impact.

“Americans are overwhelmingly not taking their nutritional wisdom from the government,” she said.

Public distrust of the government’s guidance on food, said Balsamo, has become part of the public consciousness.

“Nowadays when Americans look at an ingredients list and it’s 50 lines long-  a red light goes off, and it doesn’t matter if it’s low in fat, or low in calories.”

She notes that consumers don’t trust big businesses either. Big food companies are losing share to smaller ones. So she said the government doesn’t just need to update the definition of healthy, it also needs to work on regaining consumer trust.