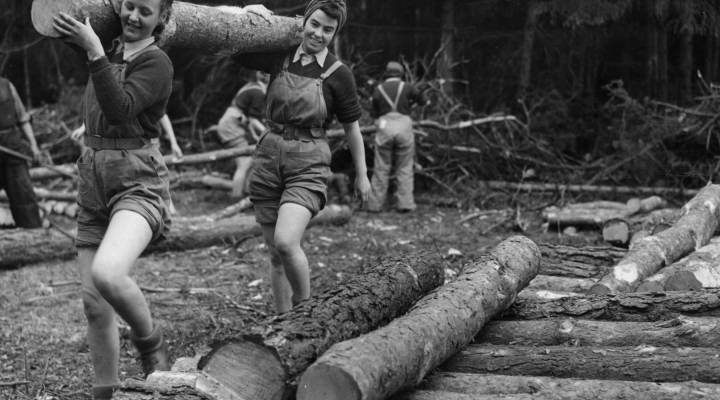 Two members of the Women's Timber Corps do their bit for the war effort by carrying a felled log through the lumber camp at Bury St Edmunds, Suffolk, 1942. Horace Abrahams/Keystone Features/Getty Images
The Uncertain Hour

Two members of the Women's Timber Corps do their bit for the war effort by carrying a felled log through the lumber camp at Bury St Edmunds, Suffolk, 1942. Horace Abrahams/Keystone Features/Getty Images

When you’re reporting on regulations, a simple question can turn existential pretty quick.

One minute you’re trying to figure out what’s in your bread, the next minute you’re asking questions like: What is bread? If I call something “bread,” does that make it bread?

Typically, there are just four ingredients defining breadiness: flour, water, salt and yeast. But breadmakers have long added another ingredient to even the simplest loaves. Wood. Sawdust. Wood fiber. In fact, there’s been some kind of wood in all kinds of food, from at least the dawn of the industrial era, up to today.

The story of edible (or less-than-edible) wood is the story of food regulation in a nutshell. Or maybe in a lumber yard.

The story starts in the 1700s, along the banks of Europe’s rivers, among mills and breadmakers who were trying to solve a problem: How do you feed the poor, cheaply?

“At some point some clever miller was like, ‘Hey, what if we combine the flour with sawdust?’” said Penn State food historian Bryan McDonald. “‘We’re selling stuff by weight, and people don’t really have a good way of knowing what’s flour and what’s sawdust.”

Wheat was scarce in Britain, but there was sawdust all over. Sometimes sawmills and gristmills even shared space.

Advocates for the poor weren’t as excited about this so-called “tree flour.” It started effecting customers’ health and the bread market, McDonald said. Mills and bakers that used sawdust, chalk and other fillers could undercut those that didn’t, and put them out of business.

Eventually, increasing government inspections and consumer demand gave rise to companies that promoted unadulterated food, like Nabisco and Quaker Oats in the 19th and early 20th centuries. Quaker sold its oats in cardboard boxes, which were novel for the time, featuring a kindly old man and scroll reading “pure.” It had a huge influence on America’s nascent packaged food industry, writes Andrew F. Smith in his book “Eating History.”

The U.S. didn’t have near the same problems with sawdust in bread as Europe because wheat was so abundant, McDonald said. Still, there’s evidence the “Poison Squad,” a sort of proto-Food and Drug Administration that tested food at the turn of the century, found their fair share of the stuff. Atlas Obscura dug up a poem by Harvey Wiley, a government food chemist who ran the experiments:

We sit at a table delightfully spread,

And teeming with good things to eat,

And daintily finger the cream-tinted bread,

Just needing to make it complete

A film of the butter so yellow and sweet,

Well suited to make every minute

A dread of delight.

And yet while we eat

We cannot help asking “What’s in it?

Or sawdust chopped up very fine,

Or gypsum in powder about which they talk,

Terra alba just out of the mine.

And our faith in the butter is apt to be weak,

For we haven’t a good place to pin it

Annato’s so yellow and beef fat so sleek,

By the 1950s, the federal government had established regulations and specific definitions for all kinds of food, including what it considered bread: “prepared by baking a kneaded yeast-leavened dough made my moistening flour with water … with the addition of salt, and usually with the addition of certain other ingredients.”

That last bit is where it gets tricky. In its history, the FDA notes that enriched bread represented an early example of how complicated it can be to regulate food additives.

One of those additives the FDA had to regulate? Cellulose, a plant fiber often taken from wood. Cellulose was “Generally Recognized As Safe” by the FDA in 1973, and it’s in a lot of food. You can tell because every few years one publication or another publishes a story along the lines of “Did you know there’s wood pulp in … ?” Burgers, tacos, cheese, ice cream! And, of course, bread.

The counterculture movement of the ‘60s and ‘70s shunned postwar convenience foods, McDonald said, but by the ‘80s consumers were looking for health food and marketers knew how to pitch cellulose.

“What you start to see is people marketing breads that say things like ‘Twice the fiber of the leading competitor [and] 30 percent less calories than store-brand white bread.’” McDonald said.

Cellulose makes that possible. Sawdust usually contains about 40 percent cellulose, McDonald said. The stuff added to today’s food is purified and safe to eat, but it doesn’t have any lasting health benefits. It just passes through the body, maybe makes you more regular but that’s it.

By the mid-’80s, consumer groups and the FTC were starting to push back against some bread companies who were making big claims about high-fiber, low-calorie white bread even though not all fiber is “dietary fiber.”

Cellulose has other uses too. Ice cream manufacturers use it to make products taste creamier without using cream. Cheese companies use it to keep pre-shredded cheese from sticking together. Those types of packaged foods can even keep their “organic” and “non-GMO” labels, because the wood used to create cellulose is often both.

Some companies have also found cellulose to be a useful filler, allowing them to cut costs and sometimes run afoul of regulations. Parmesan cheese is a particularly common offender. It’s more expensive to produce than other common cheeses, and Bloomberg found some brands promising “pure” parm are actually hawking products with up to 8.8 percent cellulose. Some didn’t even contain Parmesan.

In general, though, food companies will tell you there’s nothing nefarious happening here. They’re just trying to meet consumer demands and keep prices low with an ingredient that’s not harmful and labelled correctly.

To help clarify things for consumers, the FDA began rolling out new rules covering added fibers just this year. The process can take decades, McDonald said. That’s partially because the agency prioritizes health hazards, and added fibers can be difficult and expensive to test for.

But it’s also tough because when a bunch of bureaucrats are trying to quantify all the ways that bread is bread, things get kind of philosophical.

“You might find a huge segment of consumers that would be really excited to eat a piece of bread and find out that it had zero calories because it’s entirely cellulose,” McDonald said. “How much cellulose can be in a loaf of bread before it’s not bread anymore?”