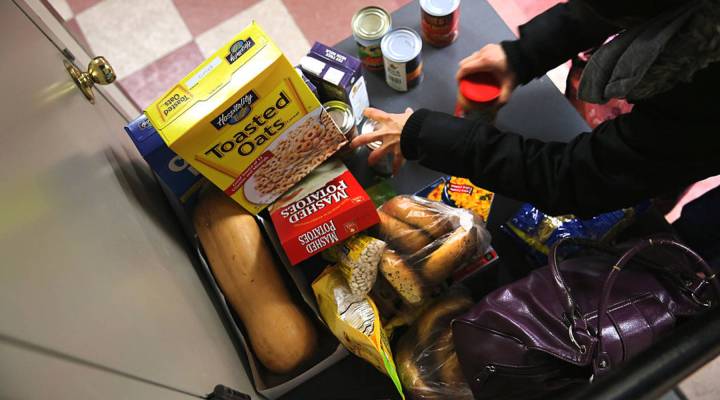 When you think of food stamps, you may think of physical pieces of paper that people bring to the grocery store. But users actually access their money with a card that looks kind of like a credit card.

But tech hasn’t exactly kept up with the needs of people who use food stamps, now called the Supplemental Nutrition Assistance Program. To check their balance, they have to call a government number and enter a 16-digit ID number.

“You have to wait to hear the prompts, and then you have to hit in the numbers,” said SNAP user Lisa Ortega while shopping for bananas and bread in the South Bronx (we found Ortega through the New York Common Pantry). She said it might not seem like a big deal, but dialing that number during every grocery visit is frustrating. If you enter a wrong digit, you have to hang up and start again. “And if you don’t use it because you don’t want to fumble around, you have to put food back, and it’s humiliating, actually.”

Now there’s an app for that. Startup Propel launched the Fresh EBT app, which lets users check their balance on their phone and access special coupons and deals. Founder Jimmy Chen said about 75 percent of low-income Americans have access to a smartphone with a data plan. And research shows that this group increasingly relies on smartphones to access the Internet in place of traditional computers.

“There are lots of daily challenges that are really hard to navigate without a smartphone,” Chen said. “And so we hear from a lot of people that really, in 2017, a smartphone is not a luxury, it is a necessity.”

Ortega agreed. “I know people might feel, oh, they have a smartphone and it’s a luxury,” she said. “Being able to plug into information, I feel it’s a necessity for our people to keep up with the times.”

More than 43 million Americans are currently on SNAP benefits, and for a family of four to be eligible, it must have an annual gross income of less than $31,600. Fresh EBT has 450,000 users per month.