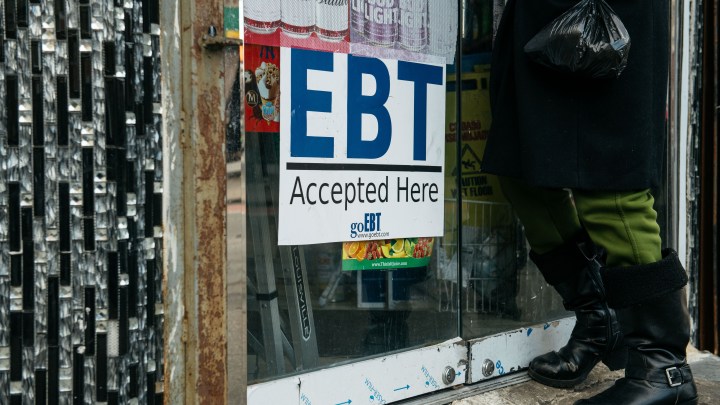 COPY
A grocery store sign alerts customers about food stamp benefits. The Biden administration is expanding food assistance amid a worsening of hunger during the pandemic. Scott Heins via Getty Images

A grocery store sign alerts customers about food stamp benefits. The Biden administration is expanding food assistance amid a worsening of hunger during the pandemic. Scott Heins via Getty Images
Listen Now

On Monday, the Joe Biden administration approved a plan to increase food aid by the largest margin in the history of the Supplemental Nutrition Assistance Program, also known as food stamps. In the new plan, the average monthly benefit rises 25%, or about $36, above the pre-pandemic rate of around $121 per person. Proponents believe the increase can reduce hunger and improve nutrition and health for up to 42 million Americans as it addresses the “pandemic surge” in food insecurity the country has seen.

However, congressional Republicans have asked for more transparency on the Department of Agriculture’s review process. Lawmakers want clear-cut evidence of a link between raising SNAP benefits and healthier diets. Some advocates also believe this expansion falls short of addressing hunger in low-income communities, as nearly 90% of SNAP recipients run out of benefits before the end of each month.

Marketplace’s Kimberly Adams spoke with Sharon Parrott, president of the Center for Budget and Policy Priorities, about the expanded benefits and what they mean for low-income communities. The following is an edited transcript of their conversation.

Sharon Parrott: What happened in 2018 is that Congress actually directed on a bipartisan basis, as part of bipartisan legislation, directed the Department of Agriculture to reevaluate the Thrifty Food Plan, which is the basis for the SNAP benefit. And so researchers and nutritionists looked at, well, what does it cost in the United States to feed a family a healthy diet? And their conclusion is that it costs more than we had previously assumed. And so this benefit increase will make it easier for many households to afford to put healthy food on the table.

Kimberly Adams: In response to the Biden administration’s latest increase to these benefits, congressional Republicans want to review the USDA process in all of this. Specifically, they want the Government Accountability Office to see if there really is a connection between an increase in SNAP benefits like the one that’s going to happen and the consumption of healthier foods. What are they going to find?

Parrott: So there’s a couple [of] things to say. First is it’s really important to understand that [the] USDA undertook this reevaluation at the direction of Congress in 2018, under a Republican president and with a Republican Congress. Congress passed the farm bill and directed USDA to reevaluate the Thrifty Food Plan based on consumption information about what people actually buy, as well as dietary guidance, as well as food prices. We know that when people have more adequate amounts of money, they are better able to buy a healthy diet. We also know that people in the United States of all income levels often fall short of those dietary guidelines. And so we need to have adequate SNAP benefits so people can afford a healthy diet. And all of us, not just low-income people, but all of us need to do a better job of making healthy choices.

Adams: And I imagine all of this harms certain low-income groups much more than others.

Parrott: That’s right. We know that food insecurity has really big impacts, negative impacts on children. We know that when kids don’t get enough to eat, they don’t do as well in school. More broadly, we know that both poverty and food insecurity — the inability to have enough money to buy the food that a household needs — is higher among Black and Latino households. They have lower earnings, they face employment discrimination, they have less access to quality education. And all of that means that their, their poverty rates are higher and their food insecurity rates are higher. That means that if SNAP is doing an inadequate job of helping people afford a healthy diet, it is impacting communities of color more than white people.

Adams: During the pandemic, there was an increase in SNAP benefits, you know, because of the emergency — that was about $28. We have the Biden administration’s recent increase, as well. Are we on a path to a more sustainable SNAP benefit for low-income families?

Parrott: Well, this is a real step in the right direction. USDA has reevaluated in a really careful way the cost of a healthy diet. Starting Oct. 1, that will be the basis of SNAP benefits going forward, on an ongoing and permanent basis, unlike some of the emergency provisions we’ve put in place to raise nutrition assistance, just during the pandemic and this economic crisis. Those are temporary and will end when the crisis ends. And some of those increases actually will end at the end of September.