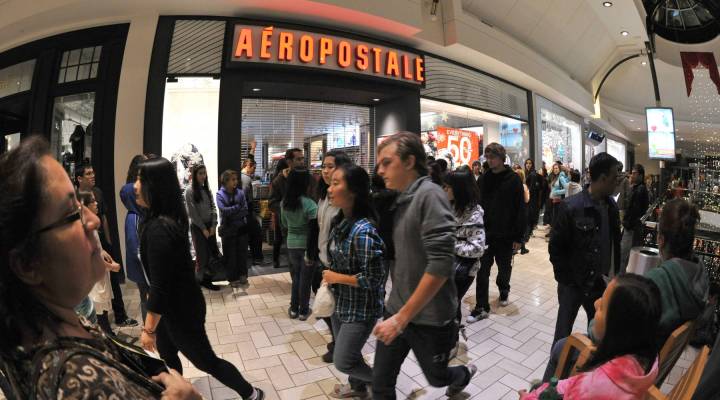 Update: Aéropostale filed for Chapter 11 bankruptcy protection overnight. Here’s the entire filing, in case you want to read up on the details (we know you do). The company wanted to underscore the dispute with MFG Sourcing, one of the store’s main suppliers, in the filing. Aeropostale has maintained MFG is in violation of the contract to supply apparel and other goods by limiting the availability of some merchandise. MFG denied the accusation. You can read Aéropostale’s press release here.

The rise of fast fashion continues to hit mall-based retailers, especially as shopping malls seem less relevant. With news of yet another mall-based chain, teen-retailer Aéropostale, reportedly filing for bankruptcy, should these retailers be written off for good?

Ken Morris, partner at Boston Retail Partners, said not so fast. He said Apple is the perfect example of a company that has a lot of success at its retail locations. Apple Stores are still packed most of the time, and they’re packed with young people.

“You know, 90 percent of all sales still happen in-store,” he said. “And that’s going to continue to happen because people love that theater.”

Still, there’s no denying the numbers. The Wall Street Journal reported Tuesday that Aeropostale plans to file for Chapter 11 bankruptcy protection in the next few days and close more than 100 of its 800 stores. In the last year and a half, mall staples like Wet Seal, Quiksilver and PacSun have also filed for bankruptcy protection.

So, who is left? Here are four mall-based brands that are still holding on to, or trying to hold on to, teenage consumers:

Hot Topic was once the home base for all things emo and goth. Chokers, black rubber bracelets, black band t-shirts and studs were its specialty. However, as the niche market for alternatively-inclined teens changed, Hot Topic needed to rebrand itself to keep up. It still sells band t-shirts, but it is noticeably less-goth and more fandom-centric, selling merchandise from popular TV shows like Doctor Who and Game of Thrones. The company went private in 2013, so its most recent financials are not public. Hot Topic has over 600 stores in the U.S.

Abercrombie & Fitch and its sister brand Hollister are known for their store-front models and a dimly-lit, over-perfumed shopping experience. The Abercrombie brands are long past their heyday of the early 2000s when bright polos with brand logos were cool among teens. In an effort to do some rebranding, Abercrombie began phasing out its once-popular logo from its items in 2014. Last year, they stopped featuring shirtless models in front of their stores and at brand events. After a steady decline over the past couple years, Abercrombie & Fitch brought in $3.5 billion in revenue last year.

Like American Eagle and Abercrombie, GAP is also a retailer with successful subsidiaries. Banana Republic, Old Navy and Athleta. Apart from these brands, GAP houses its own variety of lines including  GapKids, babyGap, GapMaternity, GapBody and GapFit. The brand has maintained an expansive breadth of items while it is not necessarily considered “fast fashion” in the way that H&M or Forever 21 operates. The GAP Inc. empire brought in $15.7 billion in sales for the 2015 fiscal year.