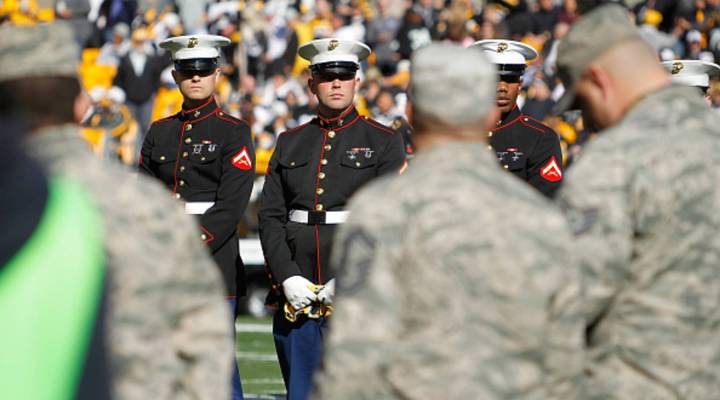 Members of the United States Armed Forces spend a moment on the field at Heinz Field before the start of the 'Salute to Service' game between the Pittsburgh Steelers and Oakland Raiders on Nov. 8, 2015 in Pittsburgh, Pennsylvania. Justin K. Aller/Getty Images

Members of the United States Armed Forces spend a moment on the field at Heinz Field before the start of the 'Salute to Service' game between the Pittsburgh Steelers and Oakland Raiders on Nov. 8, 2015 in Pittsburgh, Pennsylvania. Justin K. Aller/Getty Images

Presidential debates are highlighting an area of spending that has a direct impact on U.S. relations with other countries: defense contributions.

The figures emphasize the disproportionate U.S. role in NATO, a military alliance originally meant to protect the U.S. and its partners against aggression from the Soviet Union. The idea is if one or several of the members are attacked, the alliance would respond as a whole. So far, the only time this has happened is after the September 11 attacks. The recent terrorist attacks on Brussels, which is actually the seat of NATO, did not trigger such support.

U.S. spending is actually down from the Cold War, when it was spending more than 5 percent on military funding, but it still spends nearly double what other member countries do. It’s a point that presidential candidates have taken to task, most recently during the Democratic debates last week.

“The countries of Europe should pick up more of the burden for their defense,” Sanders said during the debate.

The U.S. spends 3.62 percent of its GDP on military spending, far surpassing the target ratio of 2 percent set by NATO. Of the other 27 countries in the alliance, only four meet the 2 percent goal:

Republican candidate Donald Trump also stirred the pot earlier this month and said the U.S. should not be spending so much more than its partners, according to The New York Times.

“That means we are protecting them, giving them military protection and other things, and they’re ripping off the United States. And you know what we do? Nothing,”  Trump said. “Either they have to pay up for past deficiencies or they have to get out.”

He also called NATO “obsolete,” bringing up the much broader debate about NATO’s purpose in a post WWII world. Russia’s status as a world power is complicated, given its declined economic influence in recent years. But, as The New Yorker noted, the U.S. military contributions tends to mean a more stable global economy. And, that might put a wrench in both Trump’s and Sanders’ simplified stances on military spending. 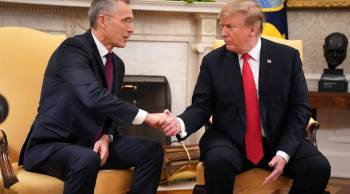 NATO – more than a military alliance