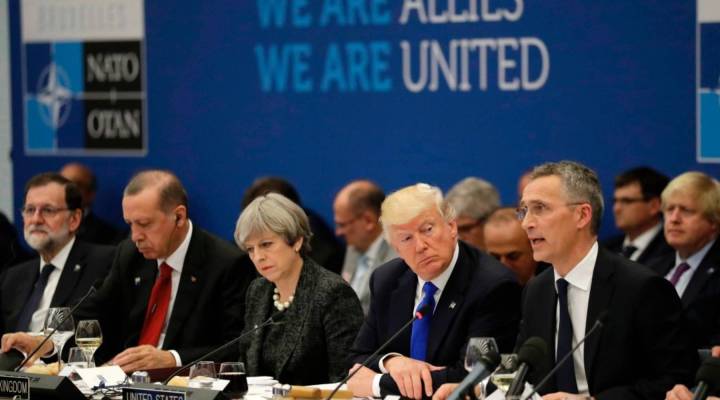 COPY
A view of world leaders during a NATO summit in May of last year. MATT DUNHAM/AFP/Getty Images
Charting the future: Marketplace at Aspen Ideas 2018

A view of world leaders during a NATO summit in May of last year. MATT DUNHAM/AFP/Getty Images
Listen Now

President Donald Trump reportedly sent what has been described as “sharply worded letters” to European allies on Tuesday, saying they don’t spend enough on their military budgets. According to the New York Times, the U.S. has told several allies, including Germany, Belgium, Norway and Canada that it has been losing patience on this issue. This comes as members of the North Atlantic Treaty Organization, or NATO, prepare for a major summit next week.

Trump has been outspoken about motivating other NATO members to increase their investment in global military defense. But how have member states reacted to all this rhetoric? Marketplace Morning Report host David Brancaccio spoke to Douglas Lute, U.S. ambassador to NATO during the Obama administration and former senior military advisor to George W. Bush, to get some context on the issue.

Douglas Lute: So I was in Europe over the last two weeks and spoke to a number of allied leaders including a stop at NATO headquarters itself where the summit will be held and there’s a good deal of anxiety based on the outcome and the atmospherics of the G-7 meeting and concern that that might be replayed in Brussels with [President Trump] there. And of course that is a fundamental concern for NATO because these NATO summits only happen about once every two years and there really is only one deliverable, one output that’s required: Unity, alliance, solidarity. And of course we didn’t get that picture coming out of the G-7.

David Brancaccio: Yeah the president didn’t sign that final accord. But NATO is about military strategic matters. That’s a different kettle of fish than a trade negotiation. We can’t separate those two?

Lute: Well you’re right it is different. And NATO is fundamentally a commitment of a “by all to defend all,” so an attack on one is an attack on all and that 70 year alliance has always been founded on that principle. But it’s important to know that the 29 members of NATO are also knitted together economically and politically. So while NATO itself is primarily the military arm of the alliance there are economic and political dimensions as well. And those are very very important and I think are under challenge today.

Brancaccio: Some of the European allies are not in the Trump administration’s view and others view paying their fair share.

Lute: And my view too. I think this is widely held. And by the way this is a longstanding bipartisan problem between the U.S. and some of its European allies. But there’s a way to do that and then there’s another way to do that.

Brancaccio: President Trump’s criticism of the amount of money that some of the European allies are kicking into NATO seems to have paid off? Some of the countries have actually upped their commitment. So would you say that some of Trump’s intensity has paid off?

Lute: Well it’s important here to put this in a broader context. First of all the most recent pledge by the, at that time, 28 allies to strive to attain 2 percent of their GDP devoted to defense budgets – so that’s where this famous 2 percent pledge comes from — was made in 2014. Why 2014? Because in the first half of 2014, [Russian President] Vladimir Putin seized Crimea, the sovereign piece of another country, Ukraine, and then destabilized the Donbass in eastern Ukraine and essentially broke all the rules. So if anybody is to be credited with increasing defense spending among European allies, it’s probably not Barack Obama. It’s probably not Donald Trump. It’s probably Vladimir Putin. And the good news here actually is that there is now a four year pattern of changed behavior. So for the last four years we have seen real increases in European defense spending, so set aside U.S. defense spending. They total 87 billion additional dollars. That’s real money. I think the current president can take some credit for that but I think it also drives deeper than that and it really drives to the increased sense of insecurity that our European allies feel.

Brancaccio: I mean if you think about it, you just hope that the United States doesn’t suddenly need the help and support of our NATO allies anytime soon if people are feeling a little bit aggrieved.

Lute: Well this has been my longstanding view of NATO. You know, NATO is this sort of thing that you just steadily maintain over the years and hope that you never need it. But if you do need it and you call someday you want the 28 democracies based on common values that make up the other allies in the alliance, you want them to come to your aid either militarily in a matter of extreme circumstances or politically. So if America has business to do in the world, the first place to start is with the other 28 allies of the alliance. It is great to have a team of 29 all pulling together. So that’s why we have the alliance and disruptions to the alliance whether they’re in the military arena or more broadly politically or economically tend to reduce the predictability of those commitments and therefore placing question what will happen in crisis.

Brancaccio: And then superimposed across a lot of this is the relationship that the U.S. has with Russia, not a NATO member. The president seems to have some sort of rapport with President Putin of Russia. He’s going to meet with President Putin soon after the NATO summit and that has to be on the minds of our NATO allies as well.

Brancaccio: I mean, not to get too philosophical to end this. There are some listeners are going to be saying to themselves “Why can’t we get along given the history of the 20th century in Europe?”

Lute: Well look for a long time since the breakup of the Soviet Union, the fall the Berlin Wall in 1989, the breakup of the Soviet Union in 1991, the American strategic goal in Europe has been a Europe whole, a Europe free and a Europe at peace. So we’ve worked for over 25 years towards that end. The challenge now frankly comes from a number of fronts it comes from a more aggressive Vladimir Putin’s Russia. It comes from the south of Europe with the rise of ISIS — the Islamic State — over the last several years. Fortunately that threat has been somewhat abated but not defeated. And it also comes from mass migration from the Middle East and Africa into European economies. So this is a multi-dimensional security challenge that the allies face. And frankly from my four years in NATO I believe the alliance is up to this. I believe the alliance has faced fundamental challenges in the past, has adapted, has proved itself up to the task and I believe NATO will do so again.