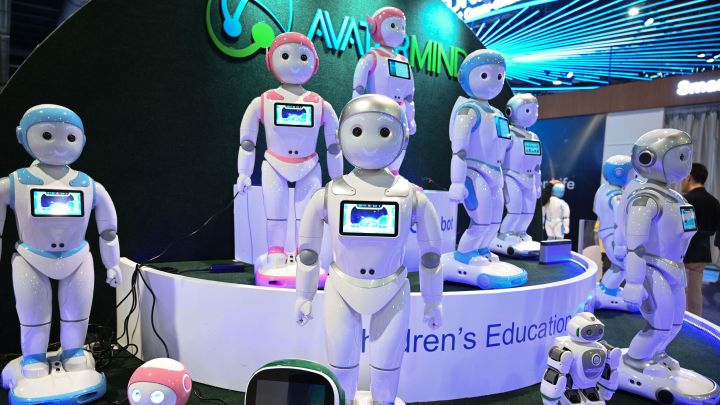 COPY
Artificial intelligence, like the AI used in these robots, is one of the main areas of scientific research this spending would go towards. Robyn Beck/AFP via Getty Images

Artificial intelligence, like the AI used in these robots, is one of the main areas of scientific research this spending would go towards. Robyn Beck/AFP via Getty Images
Listen Now

President Joe Biden is set to unveil his infrastructure plan this week. He says he wants to spend 2% of our total economic output — our GDP — on science. That may not sound like much, but it’s more than twice what we’re spending now.

“A fair amount,” said retired Maj. Gen. Bob Latiff, a former Air Force researcher. He said the spending boost would work out to hundreds of billions of extra dollars for “NASA, National Institutes of Health. All of the government organizations whose responsibilities really lie in the science area.”

The idea is to get science spending back to where it was 50, 60 years ago, during the height of NASA’s Apollo missions and moon landings and experimentation at the Department of Defense that helped lead to the creation of the internet.

“The internet’s part of your daily life — well that was a little DoD program that started in the early ’70s, and we need to be able to do things like that again,” said James Lewis, a researcher at the Center for Strategic and International Studies.

President Biden has specifically mentioned spending more money on super-fast quantum computing, biotech and artificial intelligence. The National Security Commission on Artificial Intelligence estimates the U.S. needs to spend $32 billion over the next few years to win the AI race with China.

The Commission’s executive director, Yll Bajraktari said China could catch up to the U.S. very soon. “Our lead is between 18 to 24 months.”

Bajraktari said President Biden’s plan for science spending is a step in the right direction.