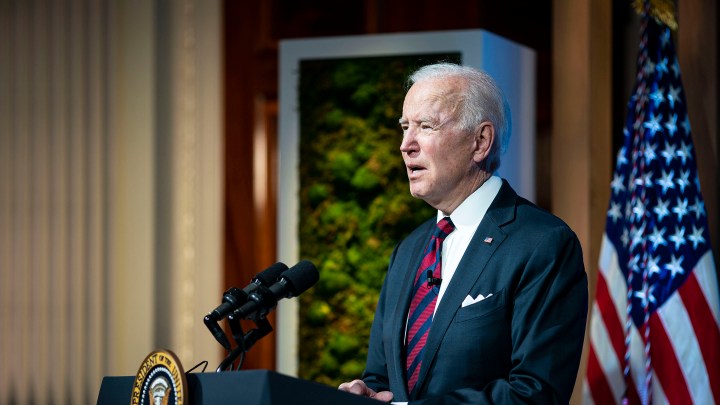 COPY
The Biden administration is putting a lot of emphasis on low- and middle-income families saying the average family will save about $13,000 to $15,000 a year in child care expenses alone. Al Drago/Pool/Getty Images

The Biden administration is putting a lot of emphasis on low- and middle-income families saying the average family will save about $13,000 to $15,000 a year in child care expenses alone. Al Drago/Pool/Getty Images
Listen Now

Among the features of President Joe Biden’s address to a joint session of Congress will be how the administration plans to raise taxes to pay for big-ticket programs like the second part of its infrastructure plan. That proposal, announced Wednesday, is the American Families Plan. The funding for it would come from moving the top income tax bracket from 37% to 39.6% and nearly doubling the tax on capital gains and dividends for people who earn $1 million a year or more.

Marketplace’s Nova Safo has been sifting through the details on this new plan. The following is an edited transcript of his conversation with “Marketplace Morning Report” host David Brancaccio.

Nova Safo: The White House wants you to think of it as money for children and families. That’s how a senior Biden administration official put it to reporters.

The administration is calling it transformational spending. Republicans say it’s too much spending.

David Brancaccio: Children and families, but targeted how?

Safo: The Biden administration is putting a lot of emphasis on low- and middle-income families saying the average family will save about $13,000 to $15,000 a year in child care expenses alone. And it estimates 5 million children will benefit.

Here’s how some of that breaks down: The administration wants to make it more affordable to have child care. It’s proposing free preschool for all 3- and 4-year-olds, and two years of free community college, regardless of income.

Brancaccio: I see tax credits in this proposal?

Safo: Yes, $800 billion worth. Among the most notable has to do with the child tax credit.

Under the last COVID relief package, eligibility was expanded to include certain low-income families that had been shut out in the past. Also, the amount of the credit was increased.

Biden wants to make the eligibility expansion permanent, and he wants to keep the amount increase until 2025.