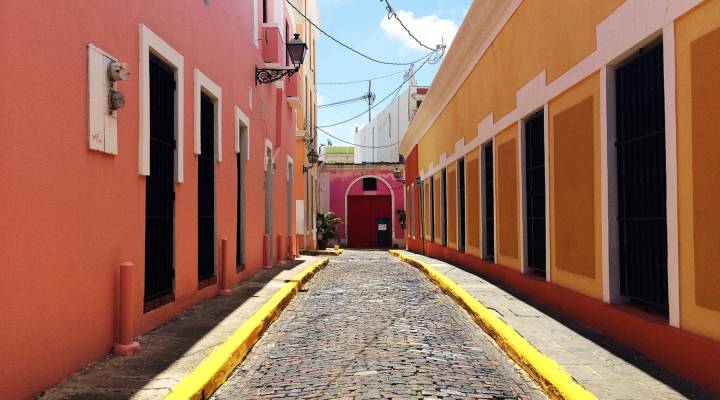 Editor’s Note: Andy Uhler went to Puerto Rico to find out how the territory’s $72 billion debt crisis is affecting its residents. This is the third part in our series.

In parts of San Juan, Puerto Rico, the financial crisis the island is going through is barely visible. In fact, some Puerto Ricans who left the island years ago have come back because they see business opportunities.

Willie Luca had a high-paying job in the fashion industry in Miami, but moved back to San Juan in November. Now he runs a bar called La Cubanita with his brother and a business partner. It’s in Old San Juan — a part of the city crawling with tourists and Puerto Ricans. Luca said he sees business opportunity in Puerto Rico.

“It’s easy to go to the States,” said Luca, seen here working behind the bar. “You just go there and you can start making money fast and live comfortable, but there’s a lot of work to be done here I just think a lot of people are not seeing it.”

Before it was a bar, La Cubanita was a bodega in Old San Juan. Luca and his partners wanted to keep the classic vibe, so they kept much of the decor the same. Though staffed with modern-day mixologists, the Old San Juan feel carries over to the drinks. Bartenders make cocktails with rum that’s distilled on the island; sugar cane was Puerto Rico’s main export for decades.

And then there are retirees who spent time in Puerto Rico as children and decided to come back after living and working on the mainland for most of their lives. There’s Joe Aponte, a veteran who lives off social security and his wife’s pension. He retired to San Juan about 15 months ago. When he was 12, his dad sent him from the South Bronx to live in Puerto Rico with his grandparents.

“I can not take that away, I am both,” he said. “I’m Puerto Rican by my ancestors, by my parents. And I’m a New Yorker, so I’m an American.”

Carmen Vega has been running Colmadito San Rafael in Old San Juan for years. She says most of the people in her neighborhood get their groceries at Wal-Mart and other big box stores, but they still come down to chat and play dominoes in the evenings.

Joe Aponte thinks Washington is leaving Puerto Ricans high and dry, but he’s not planning on leaving. He retired here after his wife died and says the people in his neighborhood take care of one another. He said he knows things are bad but he’s going to stick it out. Perhaps if more people were willing to do that — about a third of Puerto Ricans end up in the U.S. — the commonwealth wouldn’t be in the same economic crisis.