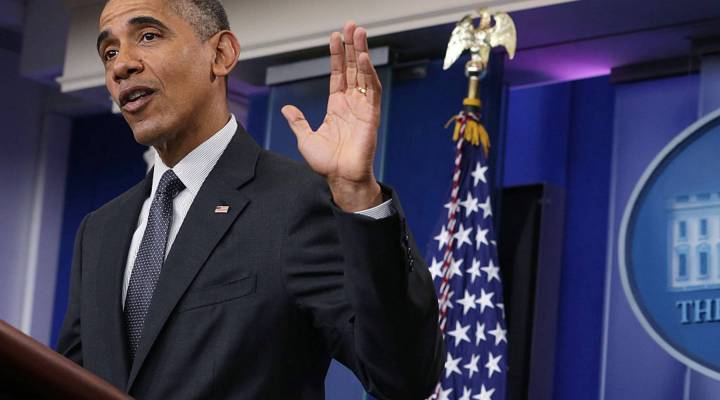 COPY
President Barack Obama delivers a statement on the economy at the James Brady Press Briefing of the White House April 5, 2016 in Washington, DC. President Obama made a statement in response to the Treasury Department announcement on corporate tax inversions that would stop companies from avoid U.S. taxes by moving their tax base overseas.  Alex Wong/Getty Images

President Barack Obama delivers a statement on the economy at the James Brady Press Briefing of the White House April 5, 2016 in Washington, DC. President Obama made a statement in response to the Treasury Department announcement on corporate tax inversions that would stop companies from avoid U.S. taxes by moving their tax base overseas.  Alex Wong/Getty Images
Listen Now

Under an inversion, a U.S. firm no longer has to give Uncle Sam a cut of its global income, paying taxes instead in the country where it is legally domiciled, which typically has a lower tax rate.

The firm does still have to pay taxes in income generated in the U.S. However, big multinationals, especially tech and drug companies with valuable patents, have ways to make profits look like they’re generated elsewhere.

“The drug or the computer software may be invented here in America, but the ownership gets shifted offshore to a tax haven,” said Frank Clemente, executive director of Americans for Tax Fairness. “And then the U.S company starts paying a licensing fee to rent the use of those patents that now exist in a tax haven.”

The income is then generated offshore, not in America. Clemente said U.S. multinationals have more than $2 trillion in profits parked or deferred overseas.

Inversions put a growing share of those profits out of Uncle Sam’s reach. And they allow companies to move money around to lower whatever remaining U.S. tax bill they might still have (though the new Treasury rules will limit those moves).

Companies invert to boost profits and shareholder value, which is all totally legal, according to Steve Rosenthal with the Tax Policy Center.

“No corporation is obliged to run its affairs to maximize taxes it pays the U.S. government just like none of us are obliged,” he said.

However, Rosenthal said someone has to pay for stuff like roads and schools, and that’s why the rest of us should care. When big multinationals pay less in taxes, the rest of us have to pay more. Or the government does less.