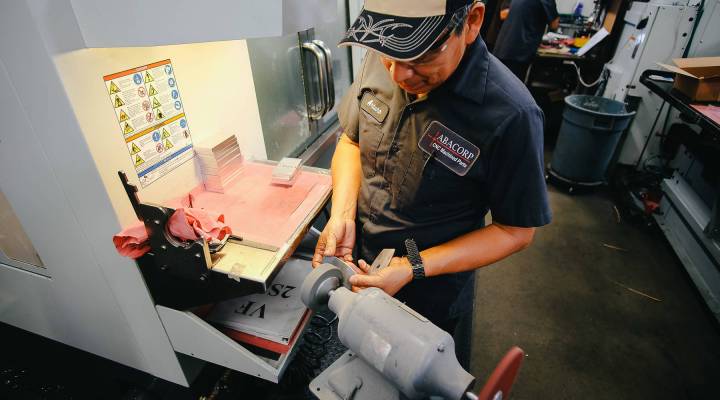 Small business owner Andy Howard has a problem that would have been unfathomable just a few years ago – he has too many jobs to fill.

The Los Angeles-based construction contractor doesn’t have a single employee on his payroll. It’s not from lack of trying. But the workers with the kind of skills he needs – carpenters and masons – have been sucked up by a Southern California building boom.

Soon, he might have to pass on an offer to renovate a house in the city’s affluent Pacific Palisades neighborhood because he can’t find the labor.

“If I had the right guy or two that I could leave and run the job, I would take it on,” Howard said.

His plight underscores one of the paradoxes of the recovery: a sometimes chronic shortage of qualified workers. Many small businesses navigated the most uncertain days of the recession by slimming down. But as the economy expands, they now are struggling to find the labor they need to stay afloat. In its most recent survey, the National Federation of Independent Businesses (NFIB) found that 42 percent of small business owners reported few or no qualified applicants for positions they needed to fill.

That can translate into having to turn down work, which stretches finances and hampers the ability to pay creditors.

“You have small businesses that are not as flexible, may not have as much reserves and access to capital,” said Christine Kymn, the chief economist and director of economic research at the Small Business Association. This shortage disproportionately impacts smaller firms, she said, which “are not able to be in limbo as easily as larger companies.”

The brightening employment picture in the U.S. overall has exposed the soft underbelly of the nation’s workforce. Many of the skills suddenly in demand are actually in short supply. Trade jobs were hit hardest during the recession and protracted aftermath, and some small business owners said many workers let their skills atrophy. Kymn said workers just entering the labor market never had the opportunity to train and learn on the job the way a previous generation did for a simple reason — there wasn’t much work.

As a result, confidence among small business owners about the future of their companies continues to decline, despite an economy with other positive signs, like consumer spending slowly ticking up and new home sales picking up pace from recent sluggish growth. In February, the NFIB survey of small business optimism hit a two-year low, falling five points from the year before. Overall business confidence remained steady, dropping just one point in the same time frame.

Small businesses are considered the backbone of the U.S. economy. From 1993 to 2011, small firms added 64 percent of new jobs to U.S. economy, according to the Bureau of Labor Statistics. Signs that they are struggling to hire could have reverberations down the line as more people re-enter the workforce.

The skills gap is especially noticeable for manufacturers. During the recession, the manufacturing sector was decimated as tens of thousands of factory jobs left the U.S. each month, squeezing workers into other professions. Now, these manufacturing firms are taking on new orders but are scouring an applicant pool that has never be exposed to skilled factory work.

Kim Frankel is president of ABACORP CNC Machined Parts, a 21-person company based in Chatsworth, California that makes parts for automotive and medical equipment. She has had two positions for machine operators that she couldn’t fill. That has dampened her ability to expand after years of retrenchment.

“The work is out there, everywhere,” Frankel said. “It’s all around me, but I can’t take on so much new work that I can’t produce it because I don’t have the caliber of people to produce it.”

Many of interviews she’s set up have fallen through because applicants cancel, can’t pass the math exams, or are not taking “enough initiative to regain the necessary factory skills,” she says.

Brandon Shamim, president of the Small Business Council within the Los Angeles Chamber of Commerce, offered a solution to entrepreneurs struggling through the hiring process.

“Broadening the focus of where they are able to recruit and attract talent needs to be much different than the normal hunting grounds,” Shamim said. This means small business owners should start turning to community college and technical schools.

Lately, Frankel is taking a new approach to hiring. She has reached out to community colleges with machinery and shop classes. She’s even considering taking on high school kids enrolled in STEM programs during in the summer.

She created a YouTube page with tutorials where potential applicants can go to start learning the computer system that controls the machines and manufacturing terminology.

But that has cost her money and time that she never had to spend on hiring previously.

“I just figure training is a cost that’s necessary and is just a part of doing business,” Frankel said. “But I’m not willing to train somebody who has no work ethic because they’ll never process, they’ll never be trained.”

For now, Frankel said more people are responding to her ads, which she saw as a good sign. One applicant just started on a 30-day trial as a machine operator. Frankel said she would know if he is a keeper by the two-week mark.

Until then her “Help Wanted” ads will remain posted.