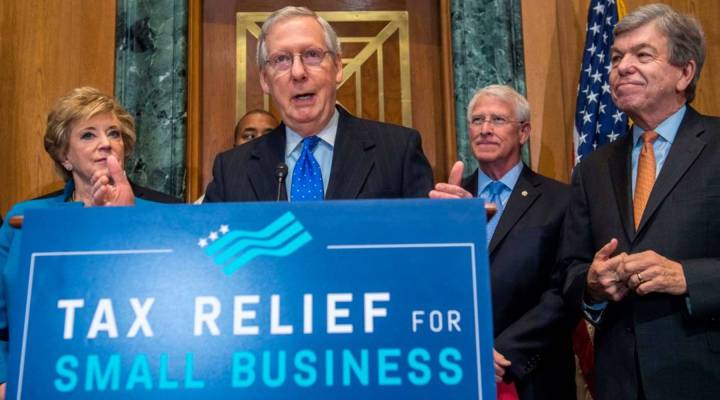 It’s striking just how unpopular the tax overhaul has become. Just 29 percent of Americans like it, according to Reuters and Quinnipiac polls, while a USA Today-Suffolk poll finds support at 32 percent. Most think the plan mainly benefits the wealthy and not the middle class. But let’s turn to a group that’s loving this tax plan: small businesses. The National Federation of Independent Business represents companies with an average taxable income of about $75,000. That trade association’s new survey out this morning finds that optimism among these companies in November is running very close to an all-time high.

Juanita Duggan, president and CEO of the NFIB, joined us to explain why. She said you have to go back to 1983 to find the mood this upbeat. Below is an edited transcript.

Juanita Duggan: [1983] was right before the Reagan expansion, and that was when the Economic Recovery Tax Act had come into play and significant tax cuts that led to 20 million new jobs and the largest peacetime recovery ever.

David Brancaccio: One of the complex, but very important parts of this that would be of crucial interest to small businesses is how the profits of their businesses are taxed often depending on the size of the business passed through to individual returns. Often those profits can be taxed at a higher rate than other corporations.

Duggan: You need to remember that 99.9 percent of all businesses are small, and three quarters of those in our membership are the pass-through entities. So they do pay on their individual return. And you can see tax rates as high as 43 percent, and corporations only pay 35 percent. This is why NFIB was so concerned about this tax bill, because at the beginning, we thought it was leaving too many small businesses behind. Now we have really good provisions, and I think the difference is going to be either a very good tax cut, or a great tax cut depending what Congress does this week.

Duggan: Finding qualified workers and in some cases having no applicants. The jobs are there. We’re creating the jobs, but they’re not able to find the kind of educated workforce with the right skills that they need.

Brancaccio: So some of this is training the workers we need, some of this is the strength of the economy currently. What do businesses think? Do you think the Trump administration’s tougher line on immigration is contributing to this trouble finding the people they need to work?

Duggan: It’s unclear. We haven’t asked that question directly, but it’s clearly in some ways just a big skills gap, and also, the social skills of some of the younger workers coming into the economy.

Brancaccio: So do you have any sense of what small businesses might do with the money they save on taxes under these plans?

Duggan: They have told us that they want to expand. They want to buy equipment. They want to purchase more inventory. They want to create a couple of jobs. They want in some cases to give  better benefits to their workers. So we know that this money’s going to be plowed back into the businesses.