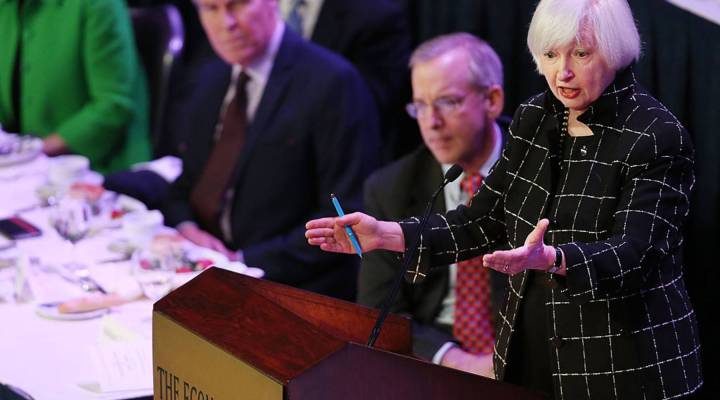 Federal Reserve Board Chairwoman, Janet Yellen speaks at the Economic Club of New York on March 29, 2016 in New York City. Due to an easing of domestic financial conditions, Yellen said that growth in the United States economy remained on track.  Spencer Platt/Getty Images

Federal Reserve Board Chairwoman, Janet Yellen speaks at the Economic Club of New York on March 29, 2016 in New York City. Due to an easing of domestic financial conditions, Yellen said that growth in the United States economy remained on track.  Spencer Platt/Getty Images

Federal Reserve Chair Janet Yellen spoke at Economic Club of New York on Tuesday about the outlook of the economy and the future of monetary policy in the U.S. Yellen reflected on the changes in the global economy since she announced federal interest rate hikes last December.

“The proviso that policy will evolve as needed is especially pertinent today in light of global economic and financial developments since December, which at times have included significant changes in oil prices, interest rates, and stock values,” she said.

Although the interest rate set by the Federal Open Market Committee, or FOMC, in December remains at one-fourth of a percentage point, Yellen did not rule out another hike.  She said that “gradual increases” are likely to be warranted in coming years.

Yellen stated that she considers it “appropriate for the Committee to proceed cautiously in adjusting policy.”

We followed along as pundits, experts and reporters weighed in on Twitter:

Yellen saying it's appropriate to "proceed cautiously" with interest rate increases causing lots of leaders to break out & explode higher.

Janet Yellen, speaking in NY, repeats what she said after March FOMC.
Clarity: B+
Consistency: A+
Entertainment: D-https://t.co/62AWMf3udH

#Yellen puts more emphasis than ever on weak global economy, global markets, potential for impact on US, says this main change Dec to March

The absence of any discussion of negative interest rates in the Yellen speech was encouraging.