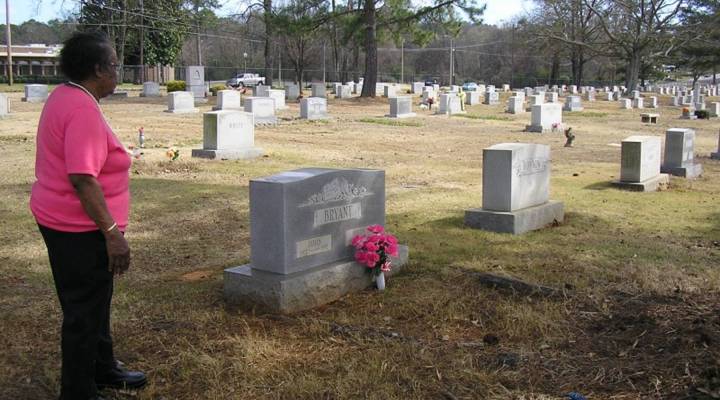 Betty Moncrief stands at the grave of her mother. Nancy Marshall-Genzer/Marketplace
Listen Now

I’m with Betty Moncrief in a cemetery in Birmingham, Ala. We’re standing under a tree, which shades four graves.

She points to her mother’s grave, and then to the one she’s picked out for herself.

Betty is a sturdy 79-year-old who tells me to watch my step on the uneven ground. I wanted to see the grave because paying for it is one of the things that keeps Betty up at night, worrying.

I flew to Birmingham to meet Betty because she was among the more than 1,000 Americans who responded to the latest Marketplace-Edison Research Poll about how people are feeling about their economic situations. Betty was among the most anxious.

Before visiting the cemetery, Betty and I speak in her immaculate house, talking about her worries.

We go over her monthly finances. She gets a Social Security check every month for $754. She gets $79 a month in food stamps. That doesn’t go too far. Most fresh vegetables are out of reach.

Betty reaches for a stack of bills.

“My biggest bills I have is the utility bills,” she said.

In the stack, a bill for $34.44. It’s her monthly payment toward a vault for her grave.

“It’s my only luxury that I’m really paying for, for myself,” she said. “Somebody got to buy it. So I might as well try to buy it myself.”

Folks who scored high on our anxiety index told us they lay awake at night, worrying about money. Betty said she does that sometimes. After paying her bills last month, she had just $10 left.

But Betty doesn’t want you feeling sorry for her. This is not a pity party. She has family in Birmingham. She could ask them for money in an emergency, though she said she’s never had to.

And Betty said she’s got friends who are a lot worse off than she is. Friends who don’t have family around, and who are running out of money. Betty said a handful of friends have even tried suicide.

“They would tell me they don’t know what happened to their money,” she said. “When they pay a bill they got to wait till the next month to get a check, and they still don’t have money.”

Betty said when she’s feeling low or doesn’t feel well, she gets active. She grabs a rake, grabs her neighbor and heads outside.

“We be out there raking up dirt in the back alley,” she said, laughing. “Picking it up – and leaves. Trying to keep it clean.”

She said she’s making it, and that she won’t give up.