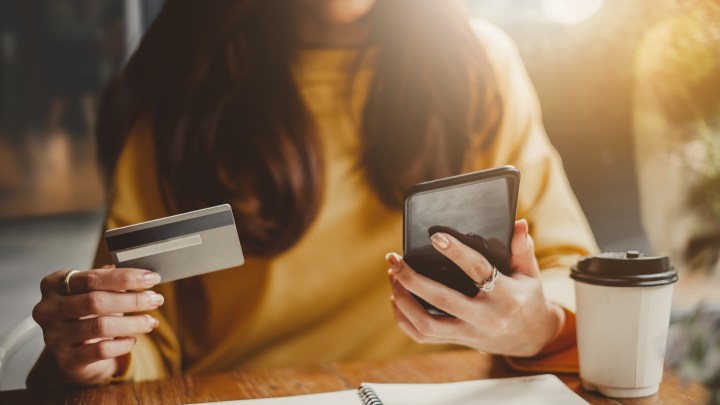 Debt collectors could be texting you soon. Nattakorn Maneerat/iStock/Getty Images Plus
Listen Now

People who are currently paying student loans have a much higher score on the Marketplace-Edison Research Economic Anxiety Index® than those who don’t have student loans — about two thirds higher.

This is pretty much in line with what we know about indebtedness and psychological well-being: they don’t go hand in hand.

“We found that those students who took on more student loans reported poorer mental health,” said Katrina Walsemann, an associate professor at the University of South Carolina who researches public health. She looked at former students years after they’d taken out loans for their education.

It’s not just student loans that have a negative correlation with mental health – it’s indebtedness generally. Patricia Drentea, professor at the University of Alabama at Birmingham, researched multiple types of debt.

“My research looked at depression, anger, anxiety, and showed a pretty strong correlation with those mental health outcomes,” she said.

Some research suggests stigma around debt can make people feel worse, and some types of debt are more stigmatized than others. Student loan debt can be seen as a rite of passage into the middle class. But something like credit card debt? Not as much.

“Credit card debt, or unsecured debt that isn’t associated with major things in life that you need, is even more likely to be associated with negative mental health,” Drentea said.

Elizabeth Sweet, professor of anthropology at the University of Massachusetts Boston, says her research shows that the the psychological consequences of indebtedness include not just feelings of stress but also deep senses of shame, guilt and failure, as a result.

“Those who feel the strongest sense of shame and personal failure in turn suffer the worst health consequences,” she said. Sweet adds that that sense of shame is not generally deserved.

“I think the issue is bigger than individuals learning to cope with stress,” she said. “I think we have some societal misconceptions about debt and indebted people as having mismanaged their money and spent frivolously and irresponsibly.

“But my study and many others have shown that most debt is due to basic living expenses like food, housing, utilities and education and, for many people, drawing on credit and loans are their only options to pay for these things.”

Things that cause depression and anxiety – like serious illness – can also cause debt. The two are correlated. Does one sometimes cause the other?

“I do think sometimes it can be causal, and some of it is through the worries, the fear of never paying it off,” Drentea said.

The fear of never paying it off, the stigma of having it in the first place, the negative mental health consequences that can result — consider them all a form of interest payment that the 87% of American families in debt might not know they’ve signed up for.

If you’re worried about your debt and it’s causing you anxiety, depression, or other feelings that are difficult to manage, here’s some advice.

“The first thing to do is if you’re stressed out by your debt — whether it is credit card debt, student loan debt, your mortgage payment, whatever might be the trouble — it’s important to take a step back and take a deep breath and understand you don’t have to go through all of this alone,” said Bruce McClary with the National Foundation for Credit Counseling, which offers financial counseling to people struggling with debt.

Look your debt in the face

“First of all, you want to admit it,” said Nancy Irwin, a clinical psychologist based in Los Angeles. “You want to get really clear on exactly the figure that you owe and to whom. Get it down on paper, maybe an Excel spreadsheet, so you’re not avoiding it, which most people tend to do.” In other words, get it down on paper so you can start getting your hands around it.

“If it’s credit card debt, then consolidate it all,” said Irwin. “Call one of your creditors and see if they will negotiate a smaller amount. Most credit cards, most credit card companies, will do that.”

You can also find people to do that negotiating for you, Irwin says, as long as you check their reviews and vet them first. “There are plenty of places, that’s a great first step, and that should reduce your anxiety and depression.”

There are groups like Debtors Anonymous, says Irwin, that can help deal with spending addictions. They can put you in touch with further resources.

Irwin recommends Vicki Robin’s “Your Money or Your Life” to help with managing money and debt wisely.

Clarification (June 7, 2019): This story has been updated to clarify the impact of indebtedness on mental health.