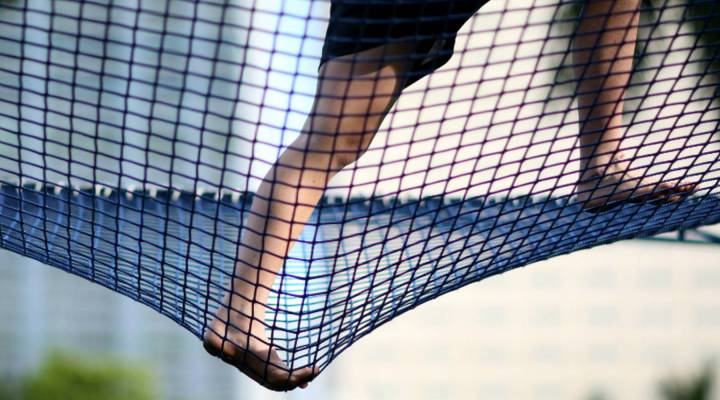 Among the questions we asked in the Marketplace-Edison Research poll was how people would handle an unexpected expense. About a quarter of respondents said it would be “very difficult” to come up with $1,000 to cover a bill, and about a third said it would be “somewhat difficult.”

The finding confirms that many people lack personal savings, investments and retirement accounts they can tap into during an emergency.

The numbers are particularly bad for African-Americans, only half of whom have personal savings, compared to 68 percent of the overall population. Under 20 percent have investments or IRAs, with Hispanics not doing much better.

Below is the story of Earnest Pettie, a 38-year-old African-American man who lives in Los Angeles. He describes what it’s like to live with no economic safety net.

Pettie’s comments have been edited and condensed for clarity.

In 2008, right after we got married, my wife, Claire, and I moved from Oklahoma to Los Angeles. I transferred from a video store in Tulsa to a video store here, and weeks after moving here, I lost that job and we immediately were in dire straits economically.

My wife is very sick and requires a lot of medical care and a lot of medicine. I did manage to get a job eventually and that job paid $12 an hour, and we were able to sort of reach a point where we were subsisting more or less. [But] I got laid off from that job during a time when my wife was getting sicker.

Earnest Pettie, pictured above, said a combination of job loss and medical debt pushed him to take out payday loans, which he has since paid back. Twenty-two percent of African-Americans in our poll have used payday loans, compared to 14 percent for the general population.

Once upon a time, I kept this box that had our bills in it and the intent with this box was that, over time, I would take bills out and pay them and we would slowly start to climb out of the medical debt that we were in, but when this box became too big to manage and was starting to spill over, I just decided that we would put that box away and never speak of it again.

Claire and I were asking her parents and my parents and my sister to borrow money a lot, and there is a point at which your parents or your siblings or your friends have given what they can afford to give and what you’re asking goes beyond that and is an amount of money that can destabilize their economic situation. Thankfully my wife and I both really love ramen, so we were able to get by on that.

The very first time that you take out a payday loan is a special kind of sadness because you realize in doing that that you’ve reached kind of the end of the line.  There is nowhere left to turn but to go and take out a payday loan, and then once you’re in the cycle of taking out and repaying payday loans, that’s a completely different feeling.  It feels like being on a treadmill behind which there is a bed of spikes. You know that you can’t slow down because if you do, you’re just going to bite the dust and so you just keep running as hard as you can and there is no relaxing when you’re in that cycle.

Had I not gotten a promotion and a raise at [my current] job, I probably would have been continuing to take out and to pay those loans indefinitely. [Additionally] my wife and I have inherited a little money and it’s kind of nice to have a savings for the first time in our adult lives.

We have two massive debts that I don’t know that we’ll ever pay back.  We have her student loans that we need to find a way to pay back and we also have medical and the medical bills — I stopped counting how much we owed in medical bills.

I don’t know that we’ll ever be able to retire, but we’ll at least be able to start putting money away for retirement, and I think that’s probably the best we could hope for.