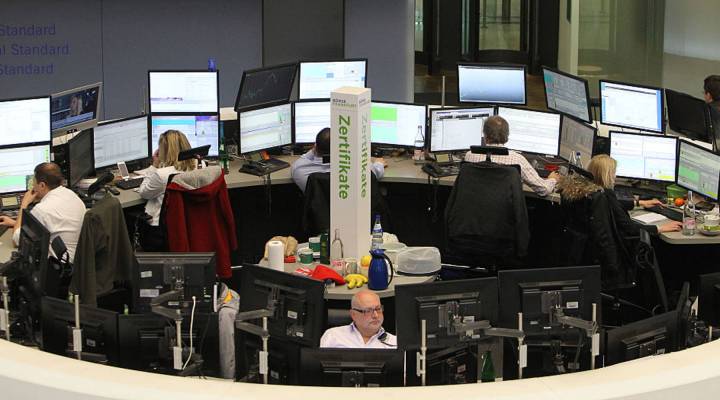 COPY
This picture shows brokers at the stock exchange in Frankfurt, Germany, on February 26, 2016. Frankfurt stock exchange operator Deutsche Boerse revealed Friday that in the proposed tie-up with the London Stock Exchange the merged group would be based in the British capital. DANIEL ROLAND/AFP/Getty Images

This picture shows brokers at the stock exchange in Frankfurt, Germany, on February 26, 2016. Frankfurt stock exchange operator Deutsche Boerse revealed Friday that in the proposed tie-up with the London Stock Exchange the merged group would be based in the British capital. DANIEL ROLAND/AFP/Getty Images
Listen Now

Two of Europe’s big stock exchanges, the London Stock Exchange Group and Gemany’s Deutsche Borse, agreed to merge into Europe’s biggest stock exchange operator. In the U.S., the company that owns the NYSE is also considering one or more acquisitions. But despite all this consolidation of ownership, there will still very likely continue to be a variety of stock exchanges to choose from. So how exactly do companies choose what exchange to list on?

In the United States there are about thirty stock exchanges of different kinds, the main ones being the NASDAQ and NYSE. How to pick which one to list on?

“In the old days, people would look at differences in trading costs and each market would argue their market mechanism was better than the other,” said James Angel, associate professor of finance at Georgetown’s McDonough School of Business. But these days, “markets are mainly electronic and their mechanisms are so similar you need an electron microscope to see any differences in market quality between them,” he said.

On top of that, even if you register with one place, your shares can usually still be traded somewhere else. So, said Angel, “you make the decision on ‘softer’ areas.”

Softer areas like which exchange gives you the most freebies.

“Many exchanges provide services to their issuers,” said Larry Harris, professor of finance at the USC Marshall School of Business. “For example, they’ll often provide assistance with corporate governance issues.” Others will have special programs for smaller companies that may not otherwise qualify to list.

Sometimes, companies have particularly “soft” reasons. “It used to be that NASDAQ used four letter tickers and the NYSE only used three letter tickers,” explained Robert Whitelaw, professor of finance at NYU’s Stern School. Companies with a preference would go with one exchange over the other “because if you wanted to spell out a word on your ticker symbol, it’s easier with four letters than three.”

The choice of stock exchange becomes more important when comparing internationally, said Whitelaw. Companies tend to list in the country where their shareholders live for one thing. For companies in developing or emerging markets, listing in the United States, for example, offers a seal of approval because exchanges there have high standards for governance and reporting.

Other than that, it’s more and more of a global market, and it matters less and less where you list.