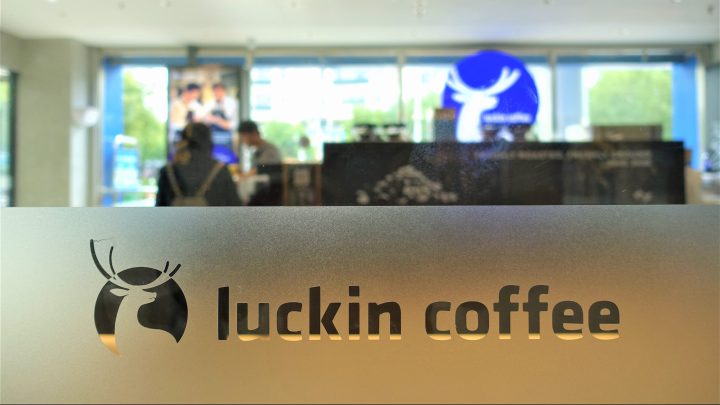 COPY
The Luckin coffee chain was initially seen as a high-tech Starbucks killer before it was forced to delist from the Nasdaq over fraud charges. Charles Zhang/Marketplace

The Luckin coffee chain was initially seen as a high-tech Starbucks killer before it was forced to delist from the Nasdaq over fraud charges. Charles Zhang/Marketplace
Listen Now

In late 2017, a Chinese upstart called Luckin Coffee entered what was mostly a luxury sector in China. Starbucks stores in mainland China were prestigious and pricey, but Luckin offered cheaper coffee. Its selling point was that customers could order and pay through its app.

A 2018 report by state-run broadcaster CGTN described Luckin’s “cashless coffee” as a refreshing addition to the market. The reporter demonstrated how she could get delivery to her office in 15 minutes, even for just one iced latte.

Back then, Luckin was seen as a high-tech Starbucks killer, and it appealed to American investors, including Seattle native Owen Sun.

“Being around Starbucks my whole life, I was intrigued [by how different Luckin was],” Sun said. “[Luckin] was very delivery-focused, didn’t have huge stores that they had to maintain with high overhead costs.”

“It seemed like that was the direction that everything was going in,” Sun said.

He was among the first to buy shares in Luckin when it listed on the Nasdaq in 2019. He lost almost all of his investment after Luckin admitted to faking more than $300 million in sales. The company was fined $180 million by the Securities and Exchange Commission and was forced to delist from the Nasdaq.

The Luckin fraud reignited a long-standing battle for U.S. regulators to access the financial audits of U.S.-listed Chinese firms. Congress has added to that pressure by passing the Holding Foreign Companies Accountable Act, which stipulates that firms cannot trade on U.S. exchanges if they do not comply with the country’s audit rules three years in a row. This gives some 200 Chinese companies until 2024 to comply or delist. U.S. and Chinese regulators are currently in negotiations.

Allegations of fraud against U.S.-listed Chinese firms stretch back to the 2000s, when private firms from China began listing on U.S. stock exchanges, according to Paul Gillis, an accounting professor at Peking University’s Guanghua’s School of Management in Beijing.

“Some of them were just outright frauds, and the short sellers attacked these companies in the mid-2000s and had great success at bringing them down,” Gillis said. “That got the attention of U.S. regulators who wanted to try to protect investors by stopping that fraud.”

It has been difficult because China’s government has blocked these efforts.

Under the 2002 Sarbanes-Oxley Act, the Public Company Accounting Oversight Board was created to set audit rules for companies listed on U.S. stock exchanges. The PCAOB also has the power to inspect and enforce the rules. It does not interact with listed companies directly, but instead the PCAOB oversees the auditors.

“When [auditors] do an audit, [they] prepare a set of working papers that document what work they have done to reach the conclusion that the financial statements are correct,” Gillis said.

The PCAOB wants full access to the working papers, but China’s government says this could threaten its national security.

“For China, its concern is whether state secrets would leak during the inspection of audit working papers,” said Li Shoushuang, who helps Chinese companies list in the U.S. with the law firm Dentons in Beijing. “That is why China has proposed to approve the working papers first. If state secrets are involved, China wants the right to refuse to provide the information, but the PCAOB does not accept this.”

The U.S. worries that China’s definition of state secrets can be broad.

“The PCAOB was able to negotiate the ability to do inspections in every country, except for China,” Gillis said. “China’s also one of the few countries that uses the U.S. capital markets as extensively as it does.”

Negotiations have been on and off for the past 20 years.

It should not be hard for the United States and China to reach a deal, since many Chinese companies listed in American exchanges do not possess state secrets, Li said. China’s regulators have signaled they are willing to strike a deal this time, but there are many other factors at play.

“On top of tense U.S.-China relations, many American congressmen are hostile or prejudiced against China,” Li said. “What was supposed to be a technical problem has now turned into a political problem.”

The stakes are high. “Failure to reach a deal would lead to a complete financial delinking with China,” Gillis said.

If the two sides manage to strike a deal, it still might not be enough to prevent another Luckin fraud.

“There has been a lot of people who seem to think that these PCAOB inspections are going to be some kind of magic bullet that is going to make fraud in Chinese companies go away,” accounting professor Gillis said. “I don’t believe that is true.”

Lawyer Li agrees and said cases like Luckin, where company staff actively concealed the fraud, can happen in every country and will not disappear. However, unlike Gillis, he believes oversight from PCAOB might improve the quality and reliability of audits.

If the U.S. and China do not strike a deal soon, some 200 Chinese companies will have to delist in the U.S.

Chinese firms in need of capital can turn to other stock exchanges, but they are not as appealing. Mainland China’s markets are underdeveloped. Hong Kong’s stock exchange might be the next best alternative to the United States. A few firms are moving in that direction already, but not all U.S.-listed Chinese companies are eligible to list in Hong Kong. American investors can buy stocks of Chinese firms in Hong Kong, though that prospect may not be very attractive.

“The Hong Kong exchange has arguably less liquidity than the U.S. exchanges,” Gillis said. “The investors may find it a little more difficult to get good prices when they’re selling stock.”

Li said Chinese companies still want to get listed in the U.S. In the present tense climate, Li helped China’s Meihua International Medical Technologies to successfully hold an initial public offering on the Nasdaq — the only Chinese firm to be approved by the SEC to do so this year. He said the current SEC review process is much harder for Chinese companies to pass, but some firms are still trying.

“For many Chinese companies, the U.S. [stock exchanges] are still their first choice,” Li said.

That might include Luckin. The coffee chain said it has cleaned up and some report Luckin wants to list in the U.S. again.

Former Luckin investor Sun said he would have to think hard about buying the firm’s shares a second time. “I don’t know. I mean, I guess you’re supposed to buy things when they’re down, right?” Sun said laughing.

Things in China can turn around quickly — sometimes for the good.

“But being burned so badly once, it would suck to learn that lesson again,” Sun said.