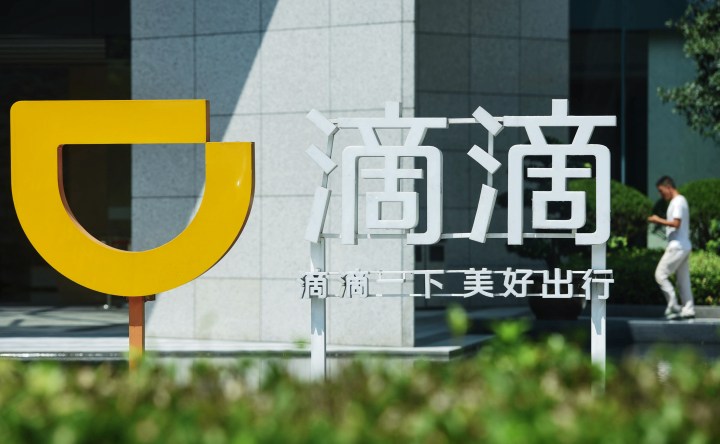 COPY
A logo of Didi Chuxing in Hangzhou, China. The ride-hailing firm was forced to stop downloads of its app from stores shortly after going public on the New York Stock Exchange. STR/AFP via Getty Images

A logo of Didi Chuxing in Hangzhou, China. The ride-hailing firm was forced to stop downloads of its app from stores shortly after going public on the New York Stock Exchange. STR/AFP via Getty Images
Listen Now

Chinese regulators have been noticeably tightening their oversight of some larger tech firms in recent days.

The ride-hailing tech firm Didi Chuxing was forced to stop downloads of its app from stores shortly after going public on the New York Stock Exchange after regulators cited data privacy concerns, leading to a significant drop in Didi’s stock. TikTok’s parent company, ByteDance, has also withdrawn its plans for an initial public offering, reportedly after meeting with regulators earlier in the year.

Privacy issues are not new to regulators, but the newly increased oversight over tech companies’ trading in foreign markets appears to represent a significant shift in China’s approach to tech regulation in general, according to Martin Chorzempa, senior fellow at the Peterson Institute for International Economics.

“The rules haven’t really been consistently enforced in a very wide variety of areas, from data privacy to data security to restrictions on what role foreign investors can play in these companies,” Chorzempa told “Marketplace Morning Report’s” Sabri Ben-Achour in a recent interview.

“These loopholes are gradually changing. I think one strong contributor to this has been [Alibaba co-founder] Jack Ma’s Oct. 24 speech, where he criticized regulators, and that made the Chinese government really recognize that these tech companies for a long time have been able to avoid regulations and use their political influence to do so,” Chorzempa said.

Below is an edited transcript of their interview, which focused on the effect this tightening might have on China’s access to foreign capital in the future and U.S. access to the Chinese market.

Sabri Ben-Achour: When a company lists on a stock exchange, that does not mean it hands over servers full of personal data or private data to the U.S. government or Goldman Sachs or whoever. So how is having an American IPO a data security issue for the Chinese government?

Martin Chorzempa: That’s a really good point. They don’t hand over that kind of data. But the regulators of the stock exchanges are mostly concerned about the veracity of the financial statements and financial data that’s given in the prospectus of the company. And part of that is reviewing the audits to make sure that the audit has been done properly. This has been a big problem in many Chinese listings in the United States, the most recent one being Luckin Coffee, where there was actually a lot of fraud going on and the numbers were overstated. That becomes an investor-protection issue for American authorities. But then to get that data and make sure that that audit is done correctly, they need access to very granular information that’s contained in the audit papers of those companies. And there, Beijing believes, there are state secrets about the contracts, maybe with the government. They also might believe that information in those papers might lead to, you know, potential disclosure of cybersecurity vulnerabilities in those companies. So they’re really not thinking that, you know, Xi Jinping’s secretary’s Didi ride history is going to be disclosed to the [Securities and Exchange Commission], but they’re thinking that maybe some leakages in that process could lead, say, the CIA to be able to get into Didi’s systems and figure that out. How founded that is, is open for interpretation.

Ben-Achour: But at the same time, companies from all over the world list in the United States and abide by our accounting standards. So why would that be a problem for Chinese companies?

Chorzempa: In China, there’s a much broader idea of what kind of information constitutes state secrets. Actually, China is not the only country to have disputes with the United States about this issue. In some cases, companies in Europe have had their governments not want to hand over this kind of data. And there has been an agreement between the U.S. authorities and authorities in those countries to determine some sensible way for them to get access to what they need to make sure the companies are not, you know, cooking the books, but also not accessing, say, you know, sensitive information about contracts with say, you know, the local defense department, that kind of thing.

Ben-Achour: Could an arrangement like that work between the U.S. and China?

Chorzempa: I think it could. It’s been negotiated for many years. The problem at the moment is that the political climate is not really conducive to a compromise because of the heated relations between the two countries. And that makes it hard for the securities regulator to give up something in terms of holding these records secret. And it also makes it difficult for the U.S. authorities to concede requiring certain information be handed over to the U.S. because they would be vilified by Congress.

Ben-Achour: Are there any other reasons besides data security, that China would be cracking down on large Chinese companies attempting to list in overseas stock markets?

Chorzempa: Yes, we’re generally seeing a shift in the way that technology regulation is done in China, in a really important way. So for a long time, these powerful technology companies have operated in a regulatory gray zone, both at home and in terms of their foreign listings, full of loopholes. And the rules haven’t really been consistently enforced in a very wide variety of areas, from data privacy to data security to restrictions on what role foreign investors can play in these companies. And these loopholes are gradually changing. I think one strong contributor to this has been [Alibaba co-founder] Jack Ma’s Oct. 24 speech, where he criticized regulators, and that made the Chinese government really recognize that these tech companies for a long time have been able to avoid regulations and use their political influence to do so. And that’s led to a much tougher line on these companies, where, you know, rules that have been debated for a long time are now actually being implemented because the roadblocks to implementation from the tech companies’ political influence have been removed.

Chorzempa: Definitely on both sides. To what extent is not yet clear. I don’t think China wants a wholesale financial decoupling from the United States. Even though it is somewhat less reliant on foreign capital than it was in the past, there are still holes in the domestic capital market. You just can’t expect that all of the firms that would have raised significant amounts of money to develop new technology and build their businesses, that they could do New York. Those can’t all suddenly move to Hong Kong and Shanghai to do their fundraising. But I think they’re less reliant on that overall. And that makes them more willing to, say, piss off foreign investors than they were in the past. And I think it’s difficult to say what exactly happened in the Didi case because all we have is reporting thus far and not necessarily a clear record of facts. But it does seem that Didi had some warnings and decided to pass along the IPO anyway, maybe betting that the regulators wouldn’t dare to take any action that would infuriate foreign investors who had bought into their IPO. And if that’s the gamble they took, it was a really bad gamble.

Ben-Achour: Where do you see all this headed, and by “all this,” I mean this increased scrutiny on Chinese companies trying to list in the U.S.?

Chorzempa: I think there will be probably less companies listing, but also, that it’s not going to be a wholesale kind of delisting of companies that have already gone and a whole throttling of the whole pipeline of firms that were going to list in the United States. There’s still a compelling reason for many of these companies to do so. And I think simply what Beijing wants to do is make sure that it has some control over this, that it makes sure that they have proper regulation on these companies before they list and that they have the ability to say yes or no before it happens. Whereas at the moment, many of these companies listing abroad are registered outside of China in places like the Cayman Islands, so there isn’t really a letter-of-the-law way for the Chinese authorities to say, “No, we’re not ready for you to IPO yet. We want to make sure your security is airtight.” So I do think we’ll settle into some equilibrium with maybe a little bit less engagement on both sides, but not some sort of wholesale delisting.