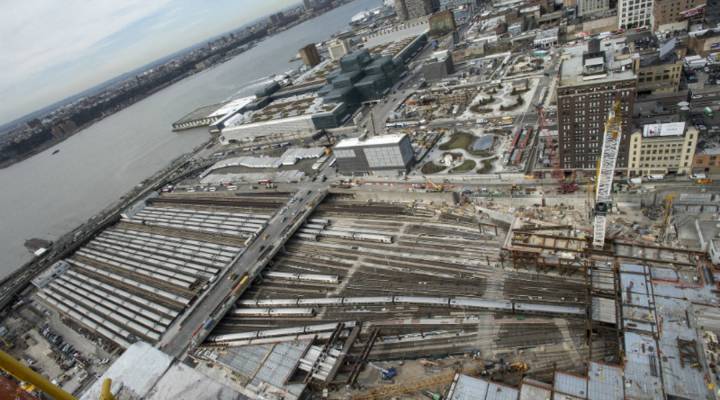 COPY
An aerial view of the site of the Hudson Yards project. Metropolitan Transportation Authority of the State of New York/Wikimedia Commons

An aerial view of the site of the Hudson Yards project. Metropolitan Transportation Authority of the State of New York/Wikimedia Commons
Listen Now

Big, high-profile real estate developments in America are scooping up funding from an unusual and controversial source: foreign investors angling to become Americans. The EB-5 visa program offers a path to citizenship to those rich enough to invest at least half a million dollars here. But there’s a growing debate about the program, with fierce defenders and critics who cut across traditional partisan lines.

Hudson Yards, a massive complex of office, retail, residential and park space coming together on Manhattan’s far west side, is one current project that benefits from these investments. The $25 billion project—the largest private development in American history—has brought in $600 million from EB-5 visa investors. That number could double by the time the whole project finishes in the middle of the next decade. Related Companies, which is developing Hudson Yards, said the EB-5 money was a “critical component.”

Supporters of the program, like Blau, point to the jobs and economic impact their developments create. The buildings at Hudson Yards will house private equity firms and luxury shops, but their bones are steel, manufactured in Virginia and welded into place by workers earning middle-class pay.

The program began in the early 1990s with the goal of bringing in job-creating investments from abroad. For many years it was tiny, well below its annual cap of 10,000 visas. But after the financial collapse, the program exploded, with a wave of Chinese applications.

As the program has grown, critics say too much money is going to real estate projects that benefit the wealthy, such as Manhattan skyscrapers and Vegas hotels.

“It is a program with a lot of flaws,” said Audrey Singer, a senior fellow at the Brookings Institution who has studied EB-5 financing. “It is easy to exploit.”

Foreigners who invest in high-unemployment areas get a break on how much money they have to put in: $500,000 versus $1 million. But developers have found ways to use that money for projects in wealthy areas, through creative drawing of districts called targeted employment areas (TEAs). By creating TEAs that include ritzy neighborhoods along with struggling ones, developers make it easier for foreign investors, but can still build in rich areas. Though legal, critics see this kind of gerrymandering as against the spirit of the law.

Singer says the EB-5 program can be a positive force, but it needs to tighten rules so more benefits go to neighborhoods that need them most. A bipartisan attempt to make changes recently failed, beaten down by the real estate lobby and Congressional supporters in both parties.

So for now, a pricey express lane to American citizenship remains open and the argument will rage on over whether it’s the right way to go.