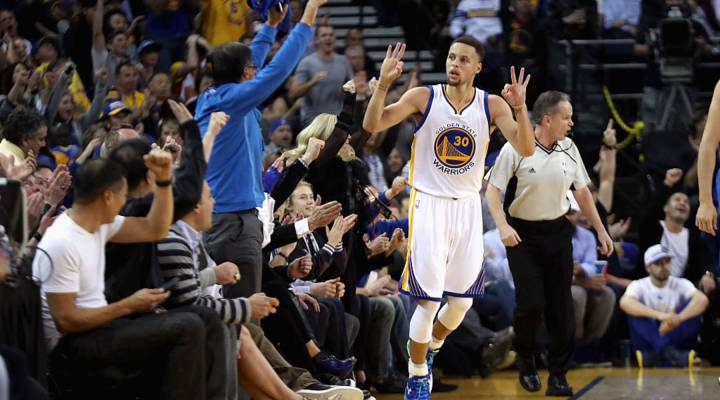 COPY
Stephen Curry of the Golden State Warriors reacts after making a three-point basket against the Oklahoma City Thunder at ORACLE Arena on March 3, 2016 in Oakland, California. Ezra Shaw/Getty Images

NBA legends like Steph Curry and Michael Jordan are hard to come by, but that doesn’t stop teams from trying to create them. Author Andy Glockner wrote about the use of data and analytics in his new book,  “Chasing Perfection: A Behind the Scenes Look at the High-Stakes Game of Creating an NBA Champion.”

Glockner on the sets of data collected to analyze performance:

There are so many different applications of the data. When people probably will think that analytics is about how to get better shots, where your shots are coming from, which players play better together – there’s a whole other world of this, though, with separate data being collected which involves health and training and performance and all that type of stuff you do off the court that enables players to get bigger, faster, stronger, and most importantly, stay healthy.

On how teams can best use data to improve their players:

There’s a lot of luck inolved, there’s a lot of development once you get your hands on things.  You can identify a draft strategy and hit on a guy but but now you gotta groom him, and he has to play with the other players. I think analytics, like anything else in an organization, is a tool, and you need a smart organization to take advantage of the tools against other organizations that might not be so sharp. I don’t think analytics leads directly to wins, I think team culture does.