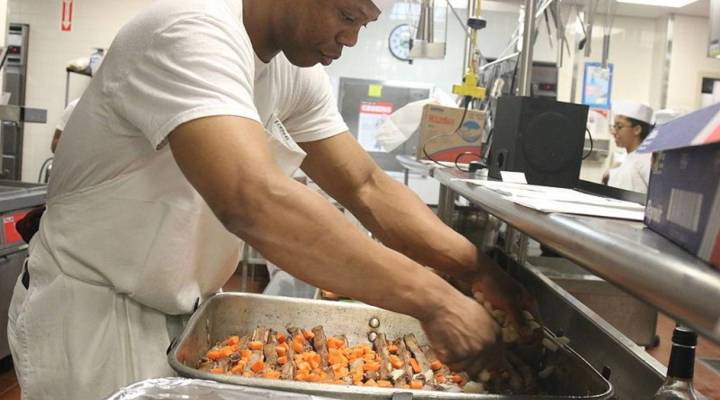 Here’s something from the military world that might sound familiar to civilian CEOs: competing goals.

The Army is getting smaller, so it wants to cut the number of chow halls. Meanwhile, it wants to improve the rest. The old do-more-with-less thing.

And if you think that’s easy,  the Army also wants to convince young soldiers to … brace yourself … eat their broccoli.  Like so many things in the Army, chow halls go by an acronym — DFACs. That’s short for dining facilities. By any name, they face a lot of challenges these days, and you can see it on the lunch line.

On a recent lunch hour at Fort Bragg, N.C., Sgt. Michael Mueller stepped up to the serving line at a chow hall and was greeted by a server.

“Uh, fries please,” he said, then added a ham and cheese sandwich to the order, and headed for the self-serve salad bar for a macaroni salad.

Mueller comes to the same chow hall almost every day for lunch, which makes sense, because it’s close to his barracks and for young soldiers like him, the meal is free, part of his package of Army benefits. He said that he wouldn’t be back for dinner though.

So he wants some variety. Maybe he’ll head to one of the fast-food places clustered around the base, he said. Probably a Subway. Some of the soldiers in the chow hall line behind him said they would grab pizza or a burger at one of the outlets that have sprung up on base. Others said they would cook for themselves in the barracks.

The Army, though, wants them to use the chow halls. And it’s trying to convince them by using the carrot rather than the stick.

The Army chiefs have ordered local commanders to come up with ideas for cutting the number of dining facilities and improving the rest. The Army began shrinking in 2012. By last summer it had dropped its troop strength and announced cuts of 40,000 more. That would leave a total of 450,000 in 2018.

Michael Williams, a senior civilian in Army logistics at the Pentagon,  acknowledged that the Army has to shrink the footprint of its dining facilities to match the number of troops. But there’s much more to the plan, which estimates the Army may need to close an estimated 14 or more of the Army’s 190 or so chow halls, and reduce floor space in at least 45 more.

“It’s not really about reducing costs,” Williams said. “First and foremost it’s about sustaining solider readiness. In order to do that, we must have a product that provides healthy and likable food choices. You know that provides better service and is the soldier’s preferred choice  and we see this as an essential enabler to the performance triad…and that’s sleep, activity and nutrition, which will lead to and enhance soldier cognitive and physical performance.”

In other words, as the Army has been preaching for a few years, soldiers have to train, eat and sleep like athletes, which is essentially what they are.

And to eat like athletes, they need to be taught —  and offered — high-performance nutrition. But the Army can’t do that if it can’t keep them in the chow halls, or make sure they have access to healthy chow when they’re working or training at “oh-dark-thirty.”

That order from the brass talks about hiring food service consultants, developing new menus, and setting up kiosks and grab-and-go cases with extended hours, and even food trucks.

“We want to offer that soldier options when you know he or she only has, you know, a few minutes here, a few minutes there, when they’re moving from one task to another.” Williams said.  “Because what you don’t want is, you get off late at night and your only option you have is maybe a fast-food place.”

Problem is, many soldiers are voting with their forks. And their wallets. Chow hall meals are free for young troops living in the barracks, like Mueller, but lots are paying to eat somewhere else. Convincing them to do that less often would help the goal of getting soldiers to make a habit of healthy diets.

Lt. Gen. Mark Hertling, now retired and a member of the President’s Council on Fitness, ran the Army’s basic training. When he took that job in 2009, he was shocked to find that three-quarters of potential young recruits couldn’t enlist, mainly because of their weight. And of those who could, most couldn’t pass an easy fitness test — push-ups and sit-ups for a minute each, then run a mile.

He gave a TEDx talk on the causes, which included the demise of school physical education classes and the rise of junk food,  and explained what he did about it.

“We were attempting not only to change the nutrimental value within the dining facilities, we were also instructing the young basic trainees on how to eat right because they were coming from a society that gets junk,” he said in a telephone interview. “So we incorporated a couple of classes on nutrition within basic training.”

Hertling and his staff started something called the Soldier Athlete Initiative, to convince — and educate — young recruits about the importance of good eating.

With that and other programs in the past few years, the Army has added more nutritious recipes, and more training about healthy eating. Chow halls now put simple, color-coded signs on the serving lines to indicate which foods are smart choices.

Obesity rates among soldiers, and the health costs and washout rates, remain high, though.

The Army wants to do better to cut into obesity rates among troops, and keep them fit for combat. But the rise of fast food, especially on base, is making that harder.

“What I’m looking for as a commander is really what the soldiers need, not what they want,” Hertling said. “And that’s a hard psychology to sell to a bunch of 18-years-olds who say, ‘What the hell are you talking about ? I can perform just as well with cheeseburgers as I can with, you know, some of this healthy food,’” he said.

“Well, no you can’t really. You’re going to wear out when you’ve got more fat than protein.”

Some question why the Army lets all the franchises onto the bases. Hertling said that’s a tough dilemma.

“It certainly sounds like you’re talking out of both sides of your mouth, doesn’t it?” he said. “But Installation Management Command can’t go into the red. And when people are demanding those kinds of things on post, unless America changes, the army is a segment of America, so you kind of want to have the same things that America has.”

“That’s where we teach, and we educate,” said Col. Sonya Cable, an Army dietician at Fort Bragg, who worked with Hertling on the Soldier Athlete Initiative. “And maybe they’re not going for that pizza every day. But maybe it’s… on the weekend. But that’s one meal out of all of them during the week.”

The Army is fighting bad eating habits that are already ingrained when young recruits come into the service. And it’s competing for soldiers’ appetites against fast-food chains that include some of the world’s savviest marketers. But Cable says the military has the brain power and leadership to lure more soldiers back.

“Even if we have to kind of shrink things, you give people the tools,” she said. “In this case, (if you give) the Army cooks the equipment, the ingredients, the opportunity to explore recipes, (it) gets their creative juices going and they come up with some great stuff. I see it here all the time.”

If the Army needs a model for that, it doesn’t have to look any further than another chow hall at Fort Bragg, the one run by the 2nd Brigade of the 82nd Airborne Division.

It’s home of the special raspberry vinaigrette, the Mongolian grill, a sushi bar and even hand-tossed salads to order.

“I did an Italian kabob last night…” said Spc. Megan Gonzales, launching enthusiastically into a blow-by-blow of her recipe and presentation.

Gonzales is an Army cook. Except here they call them chefs.

This chow hall does some of the same things as successful civilian restaurants. Gonzales and the rest of the staff create signature dishes that generate word-of-mouth, whip up specials for events and try to make diners feel like wanted guests. The chow hall polls its diners on how it can do better with customer feedback cards.

And they do some things that civilian restaurants don’t, like show feature movies every day on a wall, and put out paper copies of their most requested recipes.

“We’re competing with Pizza Hut, so we offer the unhealthier options,” Gonzales said. “But at the same time, you can have one slice of pizza and some fish and you can just balance it out … and you can come here and have a little bit of what you want and also the healthier side of everything as well.

And with us competing with Pizza Hut, it’s free (here),” she said. “They’ve already paid for it, and they can get what they want at a great price and great quality and also the fellowship that comes with coming together with your fellow soldiers.”

Civilians who work on the base and soldiers who live off post often eat lunch at the chow halls because it’s convenient, inexpensive ($5.55) and there’s plenty of variety. But Williams, the civilian executive at the Pentagon, said that one of the big challenges the chow halls face is nights and weekends, when those aren’t around. Soldiers who live off post don’t want to go to the trouble to come back on, just for another DFAC meal. That makes for a lot of excess capacity in some locations.

On Sundays, troops living off base routinely come back to the 2nd Brigade DFAC with their families for its weekly “miniature Thanksgiving.” One typical Sunday, it served 800.  And Gonzales says getting people in more means more of a shot at influencing what they eat.

And that’s what the Army wants now. More. From fewer chow halls. But … hold the fries.