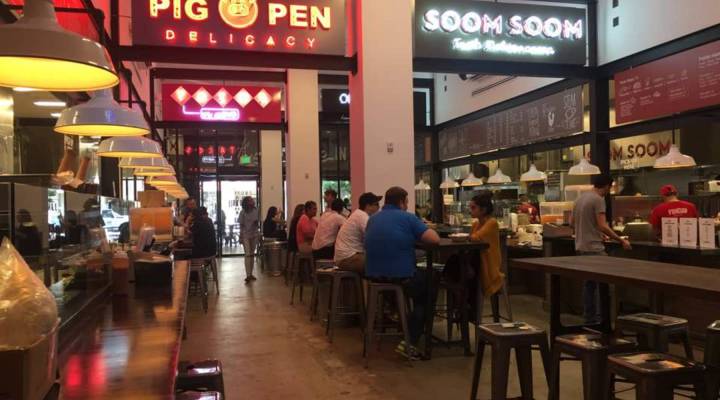 The newest food hall in Los Angeles opened in September on the ground floor of the Corporation Building, a 14-story high-rise in the heart of downtown, that was recently flipped into creative offices. David Takacs spent a recent lunch hour on the patio with an $11 bowl of fresh ravioli.

“I woke up dreaming of this pasta,” Takacs said. “So I’m happy to actually fulfill that dream today.”

Inside, there’s sleek communal seating and eight food stalls, each a couple of hundred square feet. They’re serving everything from rice bowls and shawarma to poke and pulled pork. “We like the choices that we have,” Takacs said. “It’s just nice to be spontaneous.”

The food hall concept — quick, sophisticated dining in a public market setting — came from Europe before taking off in the U.S. This ritzier, foodier, more mature cousin of the shopping mall food court can be found in most major cities these days, and new food halls are slated to open soon in smaller cities like Waco, Texas and Greenville, South Carolina.

There were about 100 scattered across the country last year, and 100 more are expected by next year. Some are small operations like this one. Others are massive spaces packed with 40 or more vendors. “It’s kind of a new age food court,” said Simon Aaronson, who works down the street from Corporation Food Hall.

He likes that his choices here aren’t the national fast food chains you’d find at the mall, but representatives of the local food scene. Many food halls host down-market versions of renowned restaurants. “I have the ability to come to one spot and choose from multiple types of places that are much, much healthier than the traditional food courts in malls that we might have been privy to in the past,” Aaronson said.

Developers around the country have a big appetite for food halls to anchor their office parks or luxury condos, said Warren Solochek, a food industry analyst at The NPD Group. And the brick and mortar retail downturn is fueling the trend. “You have large retail and office space that has become open,” Solochek said. “And the owners of the buildings are looking to fill in those large spaces.”

But that doesn’t mean you can just plop a food hall anywhere. Solochek said he hasn’t seen any high-profile flops yet, but food halls share the same risk as with any dining destination. “If you get into a space where you don’t have a lot of foot traffic, it’s just not going to be successful,” Solochek said.

Unlike at standard mall food courts, the restaurants at Corporation Food Hall aren’t competing with retail shops, said Jamal Bryant — manager at Soom Soom, a fresh Mediterranean spot. For now, at least, these high-end halls aren’t found in malls. “There is no shopping element,” Bryant said. “This is a space where you come to shop for food.”

Overhead costs are much lower, and it’s a stepping stone for chefs like Akeem Wong, who owns Thai fusion stall Buddha Belly. Wong started a food truck in LA three years ago, and wants to run a full-on restaurant someday. “If I really wanted to open up my own spot, it’d probably be double or triple what I’m spending here,” Wong said. “And it’s just way more risky. It’s like a good step from a food truck to this and then maybe the next step would be an actual standalone spot.”

We’re less than a mile from what is now LA’s most famous food hall — Grand Central Market. It began a century ago as a true public market, and has seen a culinary transformation in recent years as more young people revitalized LA’s downtown.

That urban renewal is definitely contributing to the national growth of food halls. Nicole LeBlanc, who lives and works nearby is spending her lunch hour at Corporation Food Hall with her family. “It’s great to be, or to feel like, you’re part of the city again,” LeBlanc said. Now that’s one you probably won’t hear at your suburban mall food court.