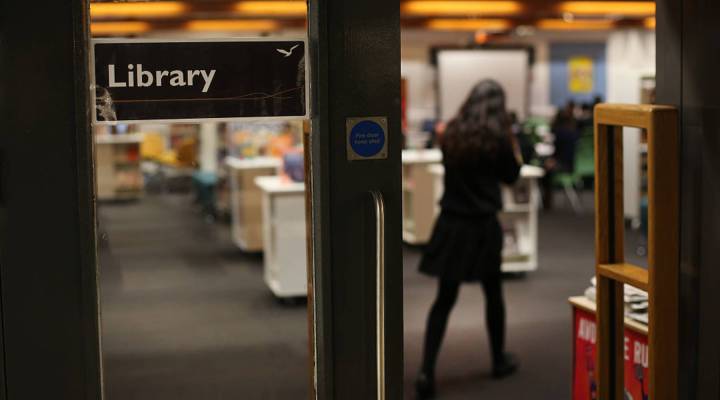 COPY
A library at a secondary school in London. Photo by Peter Macdiarmid/Getty Images

A library at a secondary school in London. Photo by Peter Macdiarmid/Getty Images
Listen Now

Despite being the generation that grew up hand-in-hand with technology, it turns out the millennial generation — those between ages 18 and 35 — love public libraries.

They’re more likely than baby boomers or Gen Xers to visit the local public library or a public bookmobile. A Pew Research Center study found that 53 percent of millennials in the U.S. had used their public library at least once in the year prior to the survey.

What have libraries been doing that’s attracting so many young adults? Marketplace Weekend staff discovered a few exciting things:

Hosting cool events: Libraries have been offering everything from concerts with local artists to movie screenings to girl empowerment forums to speed dating. (That last one might be more stressful than “cool,” but…) Marketplace Weekend went to check out a summer concert series hosted by Los Angeles County public libraries. Tiffany Chow, the librarian of El Camino Real library in East LA, said that bringing free, live music to the kids and adults in her community is an important part of her mission as a librarian.

Lending out odd and random objects: Telescopes, neckties, a toolbox! It looks like libraries are carving their own role in the sharing economy. It used to be all about books, but now donations from community members are allowing library patrons to check out so much more.

Providing interesting — and free — classes: Beer brewing classes, encounters with robots, 3-D printing, hand-looming craft workshops, painting classes, Minecraft design seminars as well as free yoga or zumba classes. Librarians must be catching on to the fact that 10 percent more library users were attending classes, programs, and lectures in 2016 than in 2015, per the Pew Research numbers.

Offering media online: Patrons of Los Angeles Public Libraries can access the entire Criterion Collection of movies from their own computers at home. Tiffany Chow of El Camino Real Library shared that she checked out the CD of the “Hamilton” musical, which was unavailable everywhere else, through her online library account. The Pew Research Center data found that 4 in ten millennials used a library website in the 12 months before the survey, compared with 24 percent of baby boomers.

Teaching useful skills for adulting: Like classes billed as “Adult 101” for teens to learn time management or personal financial responsibility. 80 percent of those surveyed by the Pew Research Center said public libraries should definitely offer programs to teach people digital skills, too.

Libraries seem to be much more than books, or “literacy pushers,” Chow said. She said the idea is to attract people to the library, then once they’re inside the door, offer all the resources they need for a lifetime of learning.

To hear what Tiffany Chow’s library in Los Angeles is doing for its community, click on the audio player above.