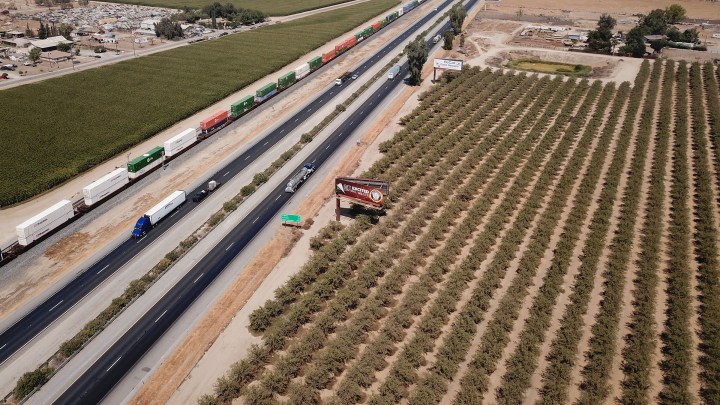 COPY
California farmers may have to sell crops domestically due to supply chain issues. Above, vehicles drive past farmland and a freight train near Pixley, California, in August. Patrick T. Fallon/AFP via Getty Images

California farmers may have to sell crops domestically due to supply chain issues. Above, vehicles drive past farmland and a freight train near Pixley, California, in August. Patrick T. Fallon/AFP via Getty Images
Listen Now

The United Nations index that measures food prices climbed 3% in October and is at its highest level since 2011, the organization reported Thursday.

High prices for raw materials should be good for farmers. But in California, growers are having trouble shipping out their crops.

In Northern California, farmer Chris Fedora of Fedora Farms is finishing up the walnut harvest. He usually sells about 80% of the nuts internationally. This year, he’s expecting to have a hard time getting the crop off the farm.

“The trucking is going to start becoming a little bit of an issue right now,” he said.

That’s because there aren’t enough shipping containers or warehouses for truckers to put the walnuts, “so it’s going to start backing up onto us,” Fedora said. “And then, if that’s the case — if we’re totally full — then if we have anything left in the field, we can’t bring it in.”

That would be deemed a loss, he added. The problem, besides space, is labor, according to Dan Sumner, a University of California, Davis, agricultural economist.

“Labor to unload the boats and get the trucks and trains moving,” Sumner said, “and that’s everything from truck drivers, to port workers, and sort of everybody in between.”

Normally over half the walnuts grown in California are exported, often to Asia. But if those nuts can’t go overseas, farmers like Fedora may have to sell domestically.

“It can depress prices, and it can hurt other farmers who don’t export, but they typically don’t have to compete with the glut of product that’ll be on the market,” Chow said.

It’s a frustrating situation for any farmer, said Richard Waycott, CEO of the Almond Board of California.

Foreign shippers, he said, are prioritizing stuff that’s being sent to the U.S. from Asia.

“It’s more in their economic interest just to head back with empty containers rather than to take our exports,” he said.

But Waycott encourages American consumers to roast some nuts this holiday season because he said prices here will be reasonable.