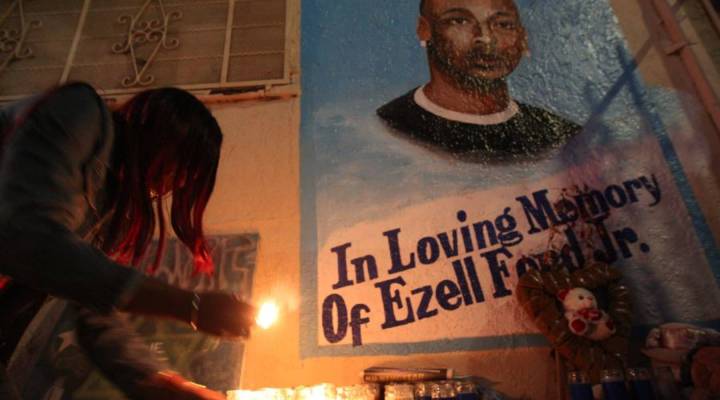 COPY
Tritobia Ford lights candles at a memorial for her son, Ezell Ford, a 25-year-old mentally ill black man, at the site where he was shot and killed by two LAPD officers in August, on December 29, 2014 in Los Angeles, California.  David McNew/Getty Images
Behind The Blue Line

Tritobia Ford lights candles at a memorial for her son, Ezell Ford, a 25-year-old mentally ill black man, at the site where he was shot and killed by two LAPD officers in August, on December 29, 2014 in Los Angeles, California.  David McNew/Getty Images
Listen Now

When you have an emergency, you’re supposed to call 911, but for some Americans, calling the police can seem just as scary as the situation they’re trying to get help with.

When someone is mentally ill, maybe threatening to harm themselves or others, and the police are called, if you’re lucky, Usher says, you’ll get a well-trained officer who’s prepared to deal with the mentally ill.

But, she says, the options quickly go down hill. When police, as is often the case, aren’t trained to deal with the mentally ill, “best-case scenario is probably they get arrested,” says Usher. “Worse case scenario — that they get shot and killed.”

Which is what happened to Jason Harrison in Dallas County, Texas. When Harrison’s mother called the police last spring for help getting her son, 38 and suffering from schizophrenia, to the hospital, shortly after police arrived at the scene they shot and killed him. According to the police Harrison had been holding a screwdriver and didn’t drop it when commanded. The entire interaction lasted less than a minute.

The officers involved in the shooting were not criminally charged, but Harrison’s family sued. This type of scenario is what many families worry about, Usher says.

Usher says more training is needed for both the safety of civilians and police, who, without the proper training, can also get hurt. But Usher says, while there are about 18,000  local and state police departments around the country, only about 15 percent do comprehensive mental health crisis training.

“Professional development is not where it’s supposed to be, and police officers know this,” she says. American police, says Haberfeld, also know they’ve never been more scrutinized. Just take all the videos that have gone viral recently. Like the one last week of a confrontation between police and teenagers at a pool party in Texas. Neighbors complained that some teens were getting out of hand. But critics say it was a police officer who was out of control.  The officer caught on tape, forcing a girl in a bikini onto the ground, face down, and then kneeling on her back, resigned a few days later.

Before police get physical, whenever possible, they should get verbal first, says Kevin Dillon, a retired police officer and owner of KFD Training and Consultation, a company that trains police.

“You really don’t want to throw hands with anybody until you throw words first,” he says. “That’s the ultimate warrior — the one who can get his opponent to concede without using violence,” says Dillon.

But Dillon says he also knows what he sees often — young officers, who, while they’ve mastered the art of texting and Facebook instant messenger, need to learn improved communication skills to serve them offline.

“Half the time they’re used to doing their communication with their hands, on their phones,” he says.  “It takes a great deal of training to be able to understand, to be able to de-escalate a situation, and then another on how to command presence, and then another situation on how to show empathy, and another on how to get somebody to confess that he just beat this child nearly to death,” says Dillon. “Think about that range of communication skills. It’s not just talking back and forth.”

But Dillon notes that budgets are tight, and he knows what training costs – anywhere from $100 for a one-day course for one officer to over $10,000 for a whole department for a week. He says when it comes to training, police just aren’t getting enough. Take use of force. He says cops often get only four to eight hours of training a year.

“We’re too reactionary,” says Dillon. “We have to start to invest now to save later. Instead of like, we’ll [do it] if we get sued. Well, we’re going to get sued. Why don’t we try to minimize the outcome by trying to invest now?”

But if it’s your responsibility to make sure a police department runs smoothly, finding extra room in your budget for additional training can be tough.

“The No. 1 priority is always going to be respond to those 911 calls,” says Sue Rahr, a member of the president’s task force on policing and director of Washington state’s Criminal Justice Training Commission. Rahr, who was with the King County Sheriff’s office for 33 years, the last 7 as sheriff, notes that 911 calls don’t stop for training.

“When you send an officer to training, you have to fill that officer’s shift on the street,” she says.

Police salaries differ all over the country, but Rahr says when she worked in King County, it cost about $2,000 a week in overtime to cover each officer who was away at training. If she wanted to put all 700 officers through training, you’d be talking millions, and budgets for additional training are often the first to be cut when funding is tight.

But says Rahr, even millions may not be enough. Each of the 18,000 police departments in the country have to answer to a city council, or a mayor or some other elected official.  And notes Rahr, if you don’t change the tough-on-crime culture at the top, nothing will change.

“When you tell police for 30 years, ‘We want you to be tough on crime,’ that culture resonates. And the message is, ‘We want you to control crime by making arrests and doing it in a very forceful way,’ ” she says. “If we want to change the culture of policing, it’s going to take more than training alone to do it.”