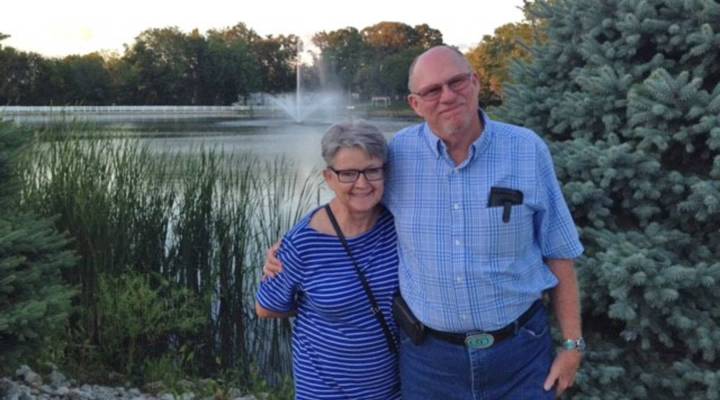 COPY
Cheryl and Steven Larson stand in front of a fountain. Cheryl Larson jumped at the chance to volunteer for a remote monitoring program, ImagineCare, that Dartmouth-Hitchcock health system in New Hampshire was launching. Joy Hafen

Cheryl and Steven Larson stand in front of a fountain. Cheryl Larson jumped at the chance to volunteer for a remote monitoring program, ImagineCare, that Dartmouth-Hitchcock health system in New Hampshire was launching. Joy Hafen
Listen Now

That’s tricky said 71-year-old Cheryl Larson, who suffers from the condition, because it can be hard to know when it’s elevated.

Last year Larson jumped at the chance to volunteer for a remote health monitoring program that Dartmouth-Hitchcock health system, in New Hampshire, was launching.

The program, called ImagineCare, mailed her a blood pressure cuff and installed an app on her phone so she could send readings to medical staff 24/7.

The check-ins paid off after she hit a stretch last year when her blood pressure kept climbing.

“If I hadn’t had somebody to check the blood pressure reading and alert me it was dangerous, I could have gone on for days and days with it steadily going higher until I did have an episode of some sort. Then I would have been in the hospital,” she said.

In the old days, before smart phones and high-tech electronic medical equipment, companies tried to get patients to monitor their chronic conditions by mailing pamphlets to patients, or calling to check-in. Whether using a smart phone or pamphlets, the goal was always the same — the holy grail of health care — lowering the costs of care for people with chronic conditions, which costs billions.

Advances in home health monitoring tools have attracted a new crop of companies eager to get in the game. Thanks to this new wave of technology it’s easier than it has ever been for doctors and nurses to stay in contact with their chronically ill patients.

But even with optimism surging, Dartmouth-Hitchcock CEO Jim Weinstein says the secret to success remains the same.

“I think engagement is important,” he said. “That’s why we’ve spent a lot of time on the design of this, using people in the hotel business.”

Weinstein said the team borrowed lessons from the hospitality sector, simplified the technology and trained staff to develop relationships with their patients.

That may help explain why ImagineCare reported a 56 percent reduction in hospital admissions, lowered the cost of care by 36 percent and saw patient satisfaction soar over their one year pilot.

A leading researcher in the field, Dr. Joseph Kvedar, with Massachusetts General Hospital, said whether it’s ImagineCare or any other company, developing meaningful relationships with patients will help this approach work due to what’s called the sentinel effect.

“If you know you’re being watched by someone that you care about, you behave differently,” he said. “In this case, patients almost to a one will tell you the fact that they care the nurse is on the other end and they don’t want to disappoint that person encourages them to behave differently.”

Dozens of companies recognize the potential in the new technological tools.

But, Kvedar said, no one yet has shown remote monitoring improves health over more than a 12 month period, or will definitely save money.

Until that happens, the quest to improve the health of the chronically ill and the spending that goes along with it will continue.