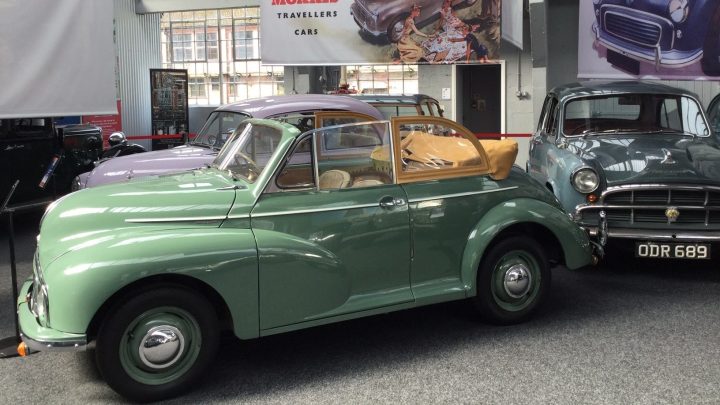 COPY
The Morris Minor, launched in 1948, was the first British car to sell more than 1 million units. Stephen Beard

The Morris Minor, launched in 1948, was the first British car to sell more than 1 million units. Stephen Beard
Listen Now

People have been flocking to a new museum in the village of Ambergate in the English Midlands. Odd that. People don’t usually “flock” to museums and, what’s more, this one celebrates a discredited technology and artifacts that are widely regarded today as an environmental menace, a contributing cause of climate change.

The museum is called the Great British Car Journey and has opened less than a decade before a ban is scheduled to be imposed on the sale of new fossil-fueled vehicles in the U.K. The site displays more than 100 vehicles that tell the story of the British car industry. It also offers visitors the opportunity to road-test some of the most venerable — but also some of the ugliest and most unreliable — models.

“I’ve been to lots of car museums and the windows are wound up. You can’t get in them. You almost can’t touch them,” said Neil Vaux, who traveled more than 140 miles from London to visit the Ambergate attraction. “The big difference here is that there’s a fantastic selection of cars you can actually get in and drive.”

The Great British Car Journey is the brainchild of Richard Usher, a former car industry boss and self-confessed “complete car nut and petrolhead” who made his fortune from a windshield company.

His exhibition, he said, celebrates what was once a major British industry.

Over the following 30 years, it was a story of slow but terminal decline for British carmaking due to a variety of factors: militant labor unions, incompetent management and intense foreign competition. Today, all the big auto manufacturers in the U.K. are foreign-owned. Usher’s collection of models (in all, he has more than 200) charts the highs and lows of the indigenous industry — the worst and the best of British cars.

“This is a piece of engineering genius!” Usher exclaimed, pointing to one of his favorite exhibits, the Mini. Launched in 1959, the two-door compact, which Usher calls “the cleverest, most loved car we ever made,” became synonymous with the swinging ’60s and a global hit. Discontinued in 2000, it’s not to be confused with the current iteration made by BMW.

Usher is not complimentary, however, toward the Austin Allegro. Born in 1973, this model was not only unreliable, but ugly.

“Frankly, it looked a bit dumpy and weird,” he said. “And it was a sales disaster. It never achieved any of its sales targets.”

Climbing inside, Usher demonstrated more of its defects.

“Once you’re in here, you’re faced with plastic of a dubious quality. The door handles are very plasticky, feel like they might fall off. And this really horrible brown color that pervades it all,” he said.

Nevertheless, this and many of the cars on display in the Great British Car Journey were the vehicles that most Brits of modest or average means either drove themselves or were driven in as children. They’re woven into the fabric of national memory, often quite fondly remembered, and visitors to the museum have been lining up to drive them.

“It’s been wonderful. My father had a car like this,” elderly visitor Ken Wheeler said after a spin in an Austin 1300 GT. “I haven’t even seen one of these for many years. To relive my experiences as a child has been absolutely amazing.”

Michael and Jill Hannington chose the Capri, which went out of production in the 1980s. “I chose it because it brings back lots of memories, when I was younger, in my 20s, driving around London,” Michael Hannington said.

Now, technically, the Capri was not strictly a British car. But American automaker Ford has been manufacturing them for so long in the U.K. that most people here consider it one. The Capri is a rather sporty fastback coupe, modeled on the Ford Mustang, and it has a special resonance for the couple. This was Michael’s car when they were courting, but “he sold it when we got married!” Jill Hannington said.

The good times were over? “Yes, absolutely,” she laughed.

Car enthusiast Vaux drove three old vehicles at the museum, including the Hillman Imp, “because it was my first ever car, which I owned in 1978,” he said. “It gave me my freedom. I drove all over the country in it.”

Vaux said his trip to the Great British Car Journey had revived many great memories and reminded him of why, over the years, he has enjoyed driving vehicles powered by fossil fuels.

“It’s almost like an organic thing. To drive it. To feel the engine responding to you and you controlling things. While electric cars … very fast, very smooth, but there’s not a great deal of interaction with them,” Vaux said. Although he will miss the internal-combustion engine, “I suppose it will be better for the environment without it,” he said.

Judging by these visitors, the Brits’ long love affair with their cars seems set to continue as the era of the electric vehicle dawns. Usher reckons he’s on to a winner with his “trip down motoring memory lane.” After all, nostalgia is one thing that always improves with age.