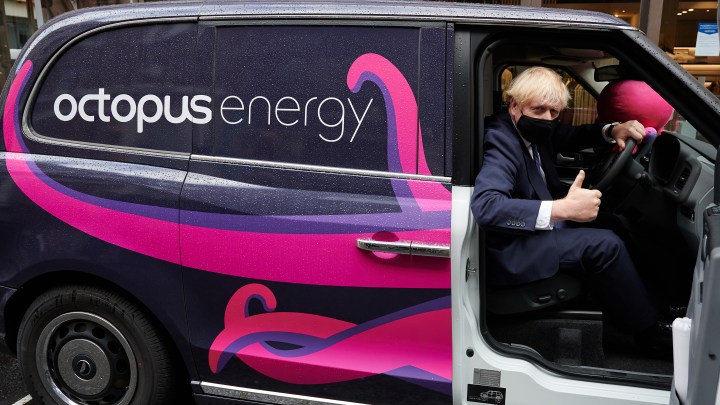 In Britain, the end may be nigh for the internal combustion engine … or at least nearer. As part of its so-called Green Industrial Revolution, the U.K. government recently announced that its ban on the sale of new petrol and diesel vehicles will be brought forward by a decade from 2040 to 2030. This would make the U.K. second only to Norway in the global race to outlaw this mode of transport.

Prime Minister Boris Johnson’s motivation is clear. He wants to burnish his green credentials as the U.K. prepares to host a global summit on climate change in Glasgow, Scotland, next year.

But how is the planned ban going down in the U.K., and especially among those who seem most devoted to their fossil-fueled vehicles?

In the very traditional village of Quainton in southern England, with its thatched cottages and its windmill on the green, I met Paul Tunnicliffe as he stood admiring his very traditional automobile, a 1933 Frazer Nash sports car.

“It has six cylinders, a single overhead camshaft and three carburetors. It’ll rev up to around 5,000 revs per minute,” Tunnicliffe said approvingly. While he revels in the technical specifications, it is clear this motor car is the love of his life.

“The fact that it’s an old car means that you are forever repairing it, and so  you get to know it very well,” he said. “You get to build quite a strong emotional rapport with a car like this. Effectively, it’s part of the family, and whenever I have to sell a car, which thankfully isn’t often, it’s a massive wrench in my life.”

Tunnicliffe is president of the Vintage Sports-Car Club and would be aghast if he were ever prohibited from driving his beloved Frazer Nash through the English countryside, but he’s certainly not opposed to the ban on the sale of new fossil-fueled cars.

“The willful destruction of the planet cannot continue unabated,” he said. “Although electric cars don’t have the character and the personality of older models like this, times move on and we have to move with them.”

An unexpected sentiment, perhaps, from a vintage car enthusiast. But it is surprising how widespread support for the ban seems to be.

“We welcome the ambition,” said Paul Mauerhoff of the Society of Motor Manufacturers and Traders, the main trade association for the British auto industry. “I think the industry wants to move towards zero-emission motoring because it’s invested significantly in this technology.”

Less surprisingly, Luke Murphy of the IPPR, a progressive think tank, also enthuses about the ban.

“I think it’s a bold step, and it’s definitely the right step,” he said. “It sends a signal to the rest of the world that the U.K. is getting serious about tackling the climate crisis. It sends a signal to the market that the U.K. is going to attempt to lead in the manufacture of electric vehicles. So it’s good for the climate and good for the economy as well.”

But Murphy and Mauerhoff both temper their enthusiasm with caution and realism. As an auto-industry spokesman, Mauerhoff points out that currently only 5% of new cars sold in the U.K. are electric.

“So now we’re looking at moving that to 100% in nine years. That really is an immense challenge,” he said. “Clearly there will need to be a lot of government help providing incentives to grow the uptake of these vehicles.”

Electric cars currently cost, on average, $13,000 more than their fossil-fueled equivalent, and the U.K. government subsidizes their purchase by up to $4,000. Murphy is calling for much more government assistance. He believes it should commit to spending an additional $13 billion a year on this green transport revolution.

“A ban on new petrol and diesel cars isn’t enough. We also need to see significant levels of public investment, not only to help people purchase electric vehicles but also to support battery manufacture and additional charging infrastructure,” Murphy said.

Infrastructure is probably the biggest challenge. Many people will want to charge their vehicles at home, but more than half of the households in the U.K. won’t be able to because they don’t have off-road parking. There are already some 35,000 charging points in public locations around the country, but there will need to be many tens of thousands more if the U.K. is to be ready for the transformation in 2030.

Green entrepreneurs Toddington and Heston Harper are responding to that challenge. Their solar energy company, Gridserve, is about to open the first of a nationwide network of 100 all-electric charging stations as part of a $1.3 billion development program. Toddington Harper is delighted with the 2030 ban.

“Within nine years we are transitioning, so it’s going to be illegal to buy a petrol or diesel car. This really is a tremendous opportunity. It’s going to be good for the environment, and it’s clearly going to be great for business, too,” Harper said at his company’s first All-Electric Forecourt in the parish of Great Notley near the town of Braintree, around 50 miles northwest of London.

“This is the most advanced charging facility in the U.K., and possibly the world,” he said. “Drivers will be able to turn up and charge their vehicle at the fastest rate each vehicle can support, using 100% renewable energy, and with the best possible charging experience.”

Harper is confident his company will make money from the whole project, not least because his customers will be captive for the 20 to 30 minutes a full recharge will take. They will therefore be tempted to spend money in the tony facilities he’s providing, which include, in his first station, a supermarket, a coffee shop, a series of private meeting rooms and even a minigym.

“This is an advantage that we have over conventional petrol stations,” he said. “Our customers will have to stay with us a bit longer than usual.”

The Harper brothers were predestined for this project. Sixty years ago, their father built gas stations and named his sons Toddington and Heston after two of the U.K.’s freeway rest stops. Now the brothers have built the first electric equivalent near Braintree, so I asked Toddington: “Are you going to name your next child Braintree?”

“Actually,” he laughed, “I have four lovely little girls, and they were born during a period when I was building a lot of solar projects to make energy, so they have middle names like Sunshine. But I think Braintree and Great Notley would be wonderful names.”

He believes that what he’s created here represents a turning point in driving history and the beginning of a bright, new future.

However, not everyone is as upbeat as Toddington Harper about the prospects for an electric car revolution triggered by the ban on new fossil-fueled cars. The British public seems skeptical. Asked in a Twitter poll whether Britain would be ready by 2030, 76% said no.

Ben Cussons also has his doubts that the charging infrastructure will be available in all parts of the country by then. As chairman of the Royal Automobile Club, a private group that derived from the U.K.’s oldest motoring organization, Cussons has a particular fondness for the internal combustion engine, especially in its earliest versions.

The club stages the annual London to Brighton Veteran Car Run that was started in 1896 to celebrate the original turning point in Britain’s driving history, the passing of a law that gave motorists the freedom of the roads. “The 1896 act repealed an earlier law that required you to have a man walking in front of your vehicle with a red flag walking at no more than 4 miles an hour,” Cussons said.

The internal combustion engine has clearly come a long way since then, and, in spite of the 2030 ban, Cussons does not believe it’s the end of the road for this technology. He thinks that synthetic, nonpolluting fuels without carbon will be developed, allowing veteran and vintage cars to keep running for recreational purposes.

“Don’t forget,” he added, “the motor car brought to an end the use of the horse as the primary means of transportation. Logic suggests we would have got rid of horses altogether. But in fact there are more horses in the U.K. today than there were 120 years ago!”