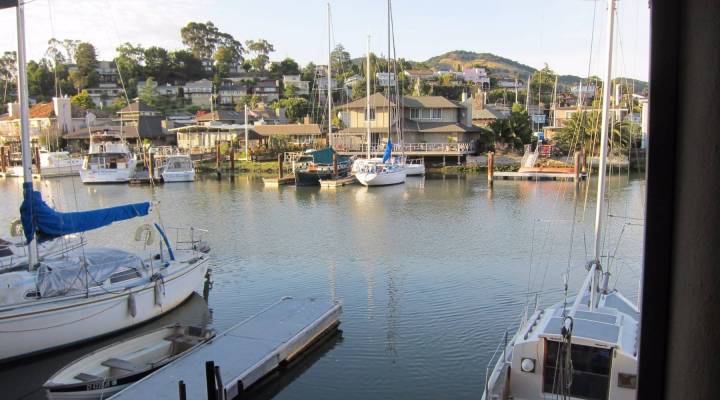 This is part two of a three-part series. Read the first and third parts.

We’re looking at the issue of affordable housing through one place where housing is not exactly affordable: Marin County, just north of San Francisco.

George Lucas*, filmmaker and longtime Marin resident, says he’ll use more than $100 million to finance, entirely, 224 low-income apartments on a piece of land he owns called Grady Ranch, in an area called Lucas Valley — named long before the filmmaker moved there.

Some of the housing will be for low-income seniors and some will be so-called “workforce” housing, aimed at people who earn about 80 percent of the area’s median income. In Marin, that means between $65,700 and $101,400 a year depending on household size. A Lucas spokesperson said that Lucas wants to do something nice for seniors and workers in Marin.

In part one of this three-part series, we heard from folks who say this kind of project is exactly what the county needs. But not everyone has embraced the idea. Listen to the second part of the series here:

Here are some of the different perspectives Marin County residents have on the project, as well as the larger issue of affordable housing in Marin:

Maria Rodriguez (left) is an administrative assistant who has worked for the County of Marin for 15 years. She lives in a small apartment with her husband in the Canal District, a crowded, industrial part of Marin.

“There’s a lot of apartment buildings, sometimes two or three families to a unit,” she says. “The rest is mostly auto repair shops and paint shops.”

The day the details of George Lucas’s affordable housing project came out, Rodriguez called PEP Housing, the non-profit developer that will be managing the project, and asked to be put on the waiting list for an apartment at Grady Ranch, once the units are built.

“I read it in the paper and I said ‘Wow!’ They took my name and number and said, ‘We’ll send you an update,’” she says. “I think it’s wonderful.”

Maggie McCann (right) is president of the Lucas Valley Homeowners Association. The well-manicured subdivision is a couple miles from Grady Ranch, down a winding country road.

When McCann heard that George Lucas was pushing ahead with plans for the affordable housing development, “it made my heart sink and my stomach feel bad,” she says.

McCann says she has gotten emails from neighbors concerned with how many more kids the new housing will bring in to local schools, and how it will impact fire, police and other community services in the area.

“We are not against affordable housing,” she says. “We just want to see it done in a sensible, responsible, good way.”

Liz Dale (center) grew up in Lucas Valley and still lives there. She’s on the board of the Lucas Valley Estates Homeowners Association.

“I used to ride my horse on this ranch when I was growing up. I think it’s beautiful,” Dale says.

She says she doesn’t want the design of the new buildings at Grady Ranch to interfere with the scenic environment and rural feel of the place or “stand out as a sore thumb.”

“There’s trails back there that most of the people in this valley really cherish. I don’t want to see a high rise if I’m hiking back in those trails.”

Bruce Anderson (right) raised his children, and now his grandson, in Marinwood, another subdivision in Lucas Valley. He says he’d like to see the quality of life that drew him to the valley be available to families along the income spectrum.

”It can be shared with another 200 or 300 people in our 5,000-person valley here,” he says. “I think we have one of the best school systems in Marin. They’re doing a tremendous job for my grandson. I’d like that to be available to many more people.”

Tarey Read (left) is the President of the Board of Directors of the Marinwood Community Services District. She has lived in Lucas Valley/Marinwood for more than twenty years, in a house her late husband bought in 1969 for $19,700. Property values have skyrocketed since then.

She supports the affordable housing project George Lucas is planning for Grady Ranch. “I think this project is so well-conceived and so needed and appropriate.”

Justin Kai (right) is also on the Board of Directors of the Marinwood Community Services District. Kai lives with his wife and infant son in Lucas Valley/Marinwood. His family moved to the neighborhood four years ago.

“It was a “financial stretch,” he says, but they loved their home’s big backyard and access to good quality schools.

“I made great sacrifices to be here,” he says. “I think it’s selfish to expect that someone else should be able to acquire (it) for little or next to nothing.”

*Disclosure: George Lucas has been a large donor to the University of Southern California. Marketplace was produced by USC until April 2000. The school retained a production credit as part of the sale to our current parent company, American Public Media. Marketplace has no editorial or financial relationship with USC.