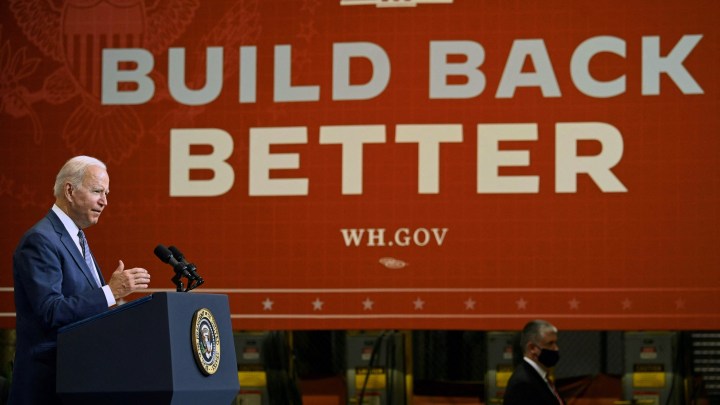 COPY
President Joe Biden promotes his Build Back Better agenda in New Jersey on Monday. His plan to expand the nation's social safety net is being pared back by congressional negotiators. Andrew Caballero-Reynolds/AFP via Getty Images

President Joe Biden promotes his Build Back Better agenda in New Jersey on Monday. His plan to expand the nation's social safety net is being pared back by congressional negotiators. Andrew Caballero-Reynolds/AFP via Getty Images
Listen Now

President Joe Biden was in New Jersey on Monday afternoon promoting his economic agenda. While the focus was on infrastructure, Democrats are expected to reach a deal this week on a scaled-back version of Biden’s Build Back Better social-spending package.

What had been a $3.5 trillion bill, to be spent over 10 years, is likely to have a much smaller price tag to please centrist Democrats in the Senate who have been holding back support. That also means a much smaller investment in programs like affordable housing.

Affordable housing advocates had high hopes for this bill, with more than $320 billion initially included for housing. It would have funded up to 750,000 new housing choice vouchers, which help low-income people pay for private rentals.

“It would put us a huge step forward from where we are today, where only 1 in 4 people who would qualify for a voucher are able to obtain one,” said Carol Galante, founder of the Terner Center for Housing Innovation at the University of California, Berkeley.

Even then, the average wait time is more than two years, according to Will Fischer at the Center on Budget and Policy Priorities.

“We know vouchers are highly effective at reducing homelessness and housing instability and overcrowding, but the program’s never been funded at anywhere near the level that’s needed to meet the need,” he said.

It’s not clear what the final legislation will include.

“These investments could literally end homelessness in our country, which has tremendous benefits to children, to families, to communities and to the country,” Yentel said.

But that’s an argument advocates are likely making for child care, paid leave and Medicaid expansion as everyone fights for their piece of a much smaller pie.