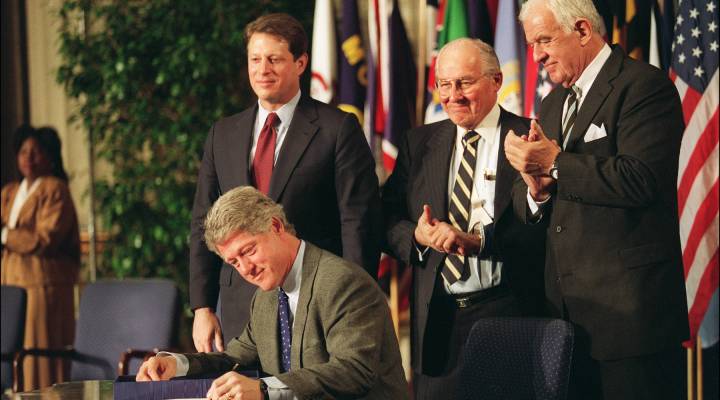 President Obama will visit Nike headquarters in Oregon on Friday to tout the benefits of free trade and the Trans-Pacific Partnership (TPP), a deal between the U.S., Japan and 10 other nations that’s deep in negotiations.

The president will also likely push for Congress to pass a pending Trade Promotion Authority bill, which would renew his ability to negotiate trade agreements before submitting them for a straight yes or no vote in Congress, without amendments.

Both initiatives have drawn criticism from members of the president’s own party and renewed a much older discussion about the North American Free Trade Agreement’s impact on the U.S. in the two decades since it was enacted.

In the 1992 presidential debates, Ross Perot cautioned that NAFTA would create “a giant sucking sound” of U.S. jobs heading south to Mexico, crystallizing public fears about its potential impact.

Those fears have colored many Americans’ present-day perceptions of the agreement, but the reality is far less dramatic, says Simon Johnson, a professor of global economics at MIT.

“NAFTA did not do as much as is claimed by people who are either for or against NAFTA,” he says. “It did increase trade, particularly between Mexico and the United States. It did displace some jobs in the U.S., and some people who lost those jobs didn’t get good jobs again.”

Trade has winners and losers. Many labor unions, for example, will say the losses aren’t worth the gains. Lots of economists disagree, including Jeffrey Schott, with the Peterson Institute for International Economics.

But he says politicians – both Democrats and Republicans – often try to sell trade deals by promising new jobs.

“People with an Econ 101 background know pretty well that you’re not going to create more jobs through a trade agreement,” he says. “But trade agreements affect the type of jobs available in an economy.”

The White House has acknowledged that NAFTA has “not lived up to the hype,” but it disagrees with critics who have dubbed the TPP “NAFTA on steroids.” President Obama argues it should be debated on its merits, not what NAFTA did or didn’t do.

But for many Americans, it’s still very hard to separate the two.

“People seem to know that NAFTA should be opposed without really understanding why,” says Andy Shoyer, a partner specializing in international trade at the law firm Sidley Austin and an adjunct professor at Georgetown University.

In the early 1990s, Shoyer was an assistant general counsel with the United States Trade Representative, and spent late nights typing drafts of the deal. He still has a T-shirt that a colleague made at the time, listing NAFTA negotiating sessions like concert tour dates.