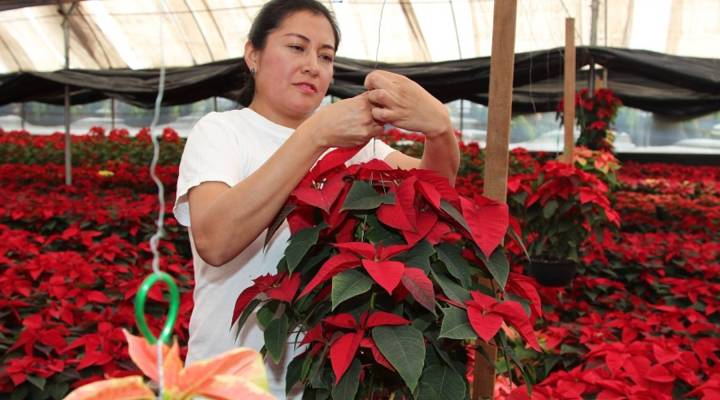 COPY
Xochitl Hernández in her commercial greenhouse. She says the end of NAFTA would cripple Mexican exporters, but said she's hopeful the new U.S. administration will tweak but not kill NAFTA. Lorne Matalon

Xochitl Hernández in her commercial greenhouse. She says the end of NAFTA would cripple Mexican exporters, but said she's hopeful the new U.S. administration will tweak but not kill NAFTA. Lorne Matalon
Listen Now

Mexicans are anxious about the future of  the North American Free Trade Act, and how the incoming administration of U.S. President-elect Donald Trump may seek to change or even withdraw from the agreement.

Mexican officials are now speaking with Asian nations about how trade between Mexico and Asia might change in a post-NAFTA era.

Mexican analysts expressed concern that new investment may slow down due to uncertainty about the agreement.  “It’s the chilling effect on investment,” said Federico Estévez, a political scientist at Instituto Tecnologico Autonomo de Mexico, a leading Mexican university. “We’ve basically turned into an industrial economy on the basis of NAFTA.”

NAFTA took effect Jan. 1 1994, aiming to remove many tariffs and integrate major sectors of the economies of Canada, the U.S. and Mexico.

“It’s going to have to be Mexico first, more self-reliant,” Estévez said.  He said Trump’s victory is prompting some in Mexico, particularly on the left, to double down on their own nationalist goals, which include reducing economic dependence on the U.S.

Last month, governor with Mexico’s Central Bank, Javier Guzman Calafell, told an audience that that the economic challenges for Mexico are pressing. He said that high inflation is hindering investment and complicating long-term planning.

Uncertainty about NAFTA’s future is something that Xochitl Hernández understands.

She manages a commercial greenhouse. She and her competitors, who depend on the U.S. export market, are clustered beside the canals of Xochimilco near Mexico City. In the greenhouse, palletes laden with lush, aromatic tropical flowers await pickup in refrigerated trucks.

“Ending NAFTA is an absurd idea,” said Hernández, speaking in Spanish.”How can we grow without such an important instrument?” she asked. She said she feared having to decipher new rules and price points should the U.S. leave NAFTA.

The Office of the United States Trade Representative says trade between Mexico and the U.S. amounted to $583.6 billion in 2015. Mexico was the second-largest market for U.S. export goods in 2015.

Mexican President Enrique Peña Nieto said publicly that Mexico is willing to modernize NAFTA, but not renegotiate the treaty. If NAFTA collapses, and if tariffs are imposed on Mexican imports in the U.S., security analyst Alejandro Hope said Mexico could retaliate with tariffs on U.S. goods. He also said major Mexican enterprises that are currently invested in numerous U.S. states might temporarily halt any planned expansion of their U.S. investments.

“This is something that the U.S. public needs to know. Going after Mexico, or harassing Mexico, it’s not a free lunch,” Hope said.

Mexican Energy Undersecretary César Hernández Ochoa said he is confident Mexico will have an opportunity to make its case for the value of a regionally integrated economy.

“If protectionist measures are done, it’s very easy to escalate them,” he said in his office in Mexico City. “So you retaliate with a different measure. It’s not a good state of things.” However, Hernández Ochoa said he fully expects the Mexico-U.S. economic relationship to grow, notwithstanding the rhetoric of the campaign.