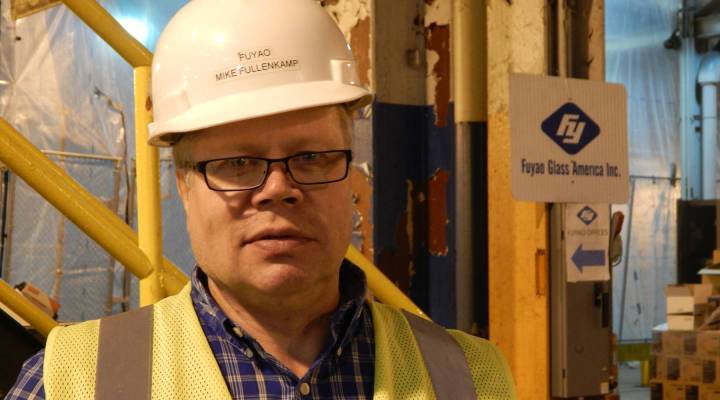 COPY
Mike Fullenkamp, a supervisor at the Fuyao plant, says he's been looking forward to Fuyao coming to town ever since the announcement over a year ago. Lewis Wallace/ Marketplace

Mike Fullenkamp, a supervisor at the Fuyao plant, says he's been looking forward to Fuyao coming to town ever since the announcement over a year ago. Lewis Wallace/ Marketplace
Listen Now

You’ve heard the story before: U.S. factories move to China, jobs are lost, whole towns shattered. But lately, things are shifting: Chinese ventures in the United States have spiked.

In 2014, Chinese companies invested more than $12 billion in projects in the U.S, including a handful of big investments in manufacturing. That’s up from about 0 in the mid-2000s.

This shift is obvious in Dayton, Ohio, where a Chinese auto-glass maker is taking over a former General Motors plant, a cavernous building that was left behind when GM closed up manufacturing operations at its Moraine plant in 2008.

Fuyao Glass America, a subsidiary of one of China’s biggest auto-glass makers, bought almost half of the old plant about one year ago, and announced it would be bringing manufacturing operations — along with 800 jobs — to the area. Recently, the number of jobs nearly doubled to more than 1,500.

The former GM Moraine plant was the subject of an HBO documentary, “The Last Truck,” about the workers who lost their jobs in 2008.

Rebecca Ruan-O’Shaughnessy, one of the first employees of Fuyao Glass America, says employees got the keys to the giant maze of a building in July.

“We didn’t know where to come in,” she says. “We just see this big building and had no idea how to get in.”

Just a few years ago, Dayton’s economy was in shards, and the Moraine plant stood as a sometimes painful symbol of the past. Now, a mix of Chinese and American workers are set up at tables and chairs that Fuyao repurposed from GM’s leftovers.

Ruan-O’Shaughnessy opens the door to a classroom filled with dozens of attentive workers in safety vests. It’s the first day for the first 40 production workers, who were hired through a temp agency. She says the company already has had 1,800 applications just for temp jobs here that could turn into permanent, full-time jobs with benefits after 90 days.

Sitting in a bare office, John Gauthier, the president of Fuyao Glass America, says the symbolism is clear: The recession is in the rear-view mirror for this company town.

John Gauthier, president of Fuyao Glass America, gestures towards a chart of leadership positions still to be filled at the company.

“It means something to us here, to be able to come here and reoccupy this [and] bring this factory back to life,” Gauthier says. He moved from Mt. Zion, Illinois, where he was the manager of a glass plant that’s also been acquired by Fuyao and will remain open as a supplier to this plant.

But this Midwestern story also reflects a trend: Chinese companies are opening up shops from Texas to Indiana, with more on the way. Experts say that’s partly because wages are on the rise in China — but in the United States, real wages for manufacturing workers have been in steady decline, particularly in the case of auto-parts workers.

Thilo Hanemann is the research director at the Rhodium Group, a research firm in New York. He says China is also less dependent on cheap labor in general.

“The growth model in China is changing very rapidly and so companies are moving from low value-added goods, [such as] socks and underwear, towards more advanced goods and services,” he says.

So Chinese companies need more of the kinds of skilled labor available in the United States. Plus, they want to be close to their customers — in this case, U.S. automakers. Between that and changes in U.S. and Chinese policy, companies like Fuyao calculate they can actually cut costs in the long run by setting up here.

Mike Fullenkamp, a supervisor at Fuyao, takes me outside the plant on a golf cart. He says not long ago, this place looked bad — a parking lot with cracked cement, overgrown with weeds.

“The guards said they used to see a bunch of coyotes running across and all that,” he says. “We’ll probably still see that, but we’re trying to tame them down a little bit. Let ’em know it’s our home now instead of theirs.”

Fullenkamp says the company hopes to have nearly 20 lines up-and-running, shaping and finishing glass for almost all the major auto makers, by 2018. At five o’clock, the workers on their first day file out to their vehicles and drive off, looking ahead through glass that could, soon enough, be made in Dayton.