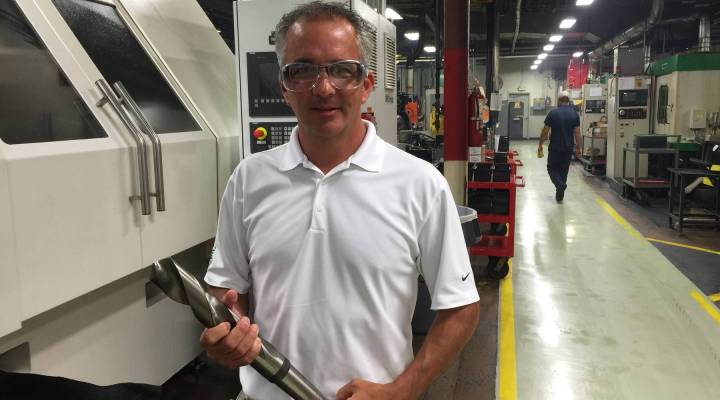 COPY
Greenfield Industries Operations Vice President Bobby Densmore holds his company’s product in front of an assembly line in Seneca, South Carolina. Greenfield was purchased by Chinese company TDC in 2009. It’s one of the many Chinese companies that are hiring American workers to assemble its products, reversing a global trend in manufacturing. Rob Schmitz/Marketplace

Greenfield Industries Operations Vice President Bobby Densmore holds his company’s product in front of an assembly line in Seneca, South Carolina. Greenfield was purchased by Chinese company TDC in 2009. It’s one of the many Chinese companies that are hiring American workers to assemble its products, reversing a global trend in manufacturing. Rob Schmitz/Marketplace
Listen Now

In the 1960s, South Carolina was a state where African-Americans fought for the right to attend white-only schools, restaurants and bowling alleys; a state where the National Guard attacked and killed protesters who were fighting for these rights. South Carolina Secretary of Commerce Bobby Hitt says that era’s turmoil had a serious impact on business.

“I think the sense was that it was hard to recruit American companies into South Carolina because of this parochial attitude,” Hitt said. “So I think the strategy started to emerge that if we couldn’t sell to our local national audience, maybe we should overseas.”

For decades, trade between the two largest economies of the world has depended on a convenient status quo: American companies employing hundreds of millions of low-wage Chinese workers to make products for export back to America. As China’s economy rises to overtake America’s, that trend is beginning to reverse.

Big Chinese companies are setting up factories all over the United States, employing American factory workers. Nowhere is this more evident than in South Carolina. Plants owned by BMW, Mercedes Benz and Volvo have now made the state the largest exporter of cars in the United States. Foreign tire makers like Michelin and Giti have made the state the largest tire producer in the nation. South Carolina now leads the country in foreign direct investment, and much of the new money is coming from China.

A machine grinds spirals into high performance drill bits on an assembly line in the small town of Seneca in eastern South Carolina. Once finished, the bits will be shipped to customers throughout North America and Europe, as well as China. Ten years ago, this factory was run by Greenfield Industries, an American drill bit company. Then the recession hit.

“It looked more like the building wasn’t even open,” said Operations Vice President Bobby Densmore. “The property wasn’t taken as good care of, the grass was head high; people thought we had closed.”

In 2009, Chinese company Top-Eastern – the world’s largest drill company – bought Greenfield. The new Chinese managers went on a hiring spree, the grass was cut, and in an overgrown plot of company land once used by employees as an ad hoc driving range, the firm’s global headquarters was built.

“So you’ve had over the last five years various levels of constructions going on, you’ve got new jobs coming in,” Densmore said. “Now we’re a driving force in the community.”

Densmore estimates the Chinese takeover of this factory added 200 jobs to a community of 8,000 residents suffering from the recession. They’re positions that pay an average of $16 an hour, and like most jobs in South Carolina, they’re nonunion; one of several things that’s attracted other Chinese companies like Hai’er, the world’s largest appliance maker, to build factories here.

“We are a low-cost community in a low-cost state,” said Richard Blackwell, executive director of the Oconee Economic Alliance, an organization that aims to attract investment to Oconee County in upstate South Carolina. “We have a lot of economic development incentives that bring that cost burden down even further. We’ve proven that global companies can be successful here.”

“We offset most of their income tax with credits,” Hitt said. “We want our companies to be profitable, because if they’re profitable, they’re going to grow and add more employees. It’s pretty straight-up formula.”