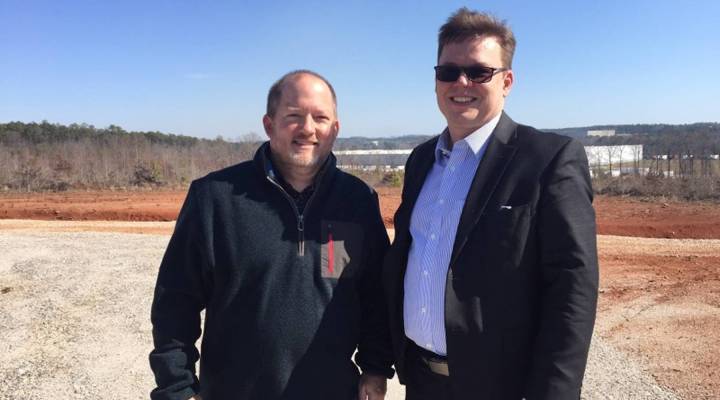 COPY
Scott Malone (left), president of Development Authority of LaGrange, and Rami Helminen, CEO of Sentury Tire North America, at the site of the future tire plant. The company is expected to create about a 1,000 jobs in Georgia.  Elly Yu

Scott Malone (left), president of Development Authority of LaGrange, and Rami Helminen, CEO of Sentury Tire North America, at the site of the future tire plant. The company is expected to create about a 1,000 jobs in Georgia.  Elly Yu
Listen Now

Scott Malone unlocks a gate at the front of a dirt path in LaGrange, Georgia, about an hour southwest of Atlanta. Malone is the president of the Development Authority of LaGrange, and standing at the top of a hill on a site where the land has been cleared, he looks out at what will become a factory for Chinese tire company Sentury Tire.

“Everything you see out there will be plant,” Malone said. “So it’s a huge, huge site, no question.”

It’s also been a huge win for the community, Malone said. Sentury Tire announced last fall it would open its first U.S. manufacturing plant here and create more than 1,000 jobs.

During the campaign, President Donald Trump blamed the loss of American manufacturing jobs on countries like China and promised to bring them back. He pledged to make trade deals that put “America first.” But in the state of Georgia, it’s been international companies, including those from China, that have been helping to create domestic jobs.

“You see the rail? That’s the rail — the rail down there on the bottom — that wraps all the way around the site. And the rail was a very important part of this project,” Malone said, pointing in the distance to railroad tracks.

Land in LaGrange, Georgia, is being prepared for the construction of a Chinese tire company, Sentury Tire.

The trains will help transport natural rubber directly to the site from the Port of Savannah on Georgia’s coast. Infrastructure is just one reason Georgia has been attractive to businesses abroad, Malone said. The state also offers other incentives, like tax breaks for creating jobs and for the purchase of manufacturing equipment.

The state of Georgia in recent years has been heavily investing in ties with China, trying to attract business. In a promotional video the state put together, people are shown playing tennis, gardening and working in Georgia. Chinese business leaders give testimonials about just how much they like living in the Peach State. There’s even a lot of authentic Chinese food in Georgia, a woman in the video explains.

In his seven years at Georgia’s Department of Economic Development, Commissioner Pat Wilson has been to China 16 times. He said China’s a big market for the state’s products.

“You’d be amazed at the amount of chicken that goes to China. You know, every time I’m in China, I always make the joke that I’m probably eating Georgia chicken, and it’s great,” he said.

In 2015, Georgia exported chicken and other goods — $2.6 billion dollars’ worth — to China. And more than 60 Chinese companies are currently operating in Georgia, according to the state department of economic development.

Wilson said as wages in China go up, businesses are looking to move to the U.S., closer to a market where they sell a lot of their products. All of this potential business is why some are worried that the relationship between the U.S. and China might take a bad turn.

“I think there is a possibility of a trade war with China,” said Jeff Rosensweig, associate professor of International Business and Finance at Emory University’s Goizueta Business School.

Of course, that hasn’t happened yet, but this is how he said it might play out: Trump’s administration has talked about across-the-board tariffs on goods from countries like Mexico and China. If something like that happens, Rosensweig said China could then retaliate by not only increasing its own tariffs, but also by stopping the flow of investment to the U.S.

“We’re talking about a society where the government has a lot of control over capital flows,” Rosensweig said. “If they say to a Chinese company, ‘We really don’t want you to take $500 million and invest it in Georgia,’ that company is not going to take $500 million out of China.”

Trump recently agreed to honor the “One China” policy, which means the U.S. only has formal ties with China and not Taiwan. While that eased diplomatic tensions between the U.S. and China a bit, Rosensweig said questions still remain about trade.

At the site of the new Sentury Tire plant, Rami Helminen, the company’s North America CEO is focused on moving ahead with construction. He’s also thinking long term.

“This has enough premises to build even two factories. So after 10 years or so then we have a possibility to expand the operation here,” he said.

Helminen said whatever happens between the U.S. and China, business would have to adapt. But he said he doesn’t want to speculate on what might happen if trade relations get really bad.

After the site is leveled out and prepared for building, he said construction on the tire plant is slated to start early next year.