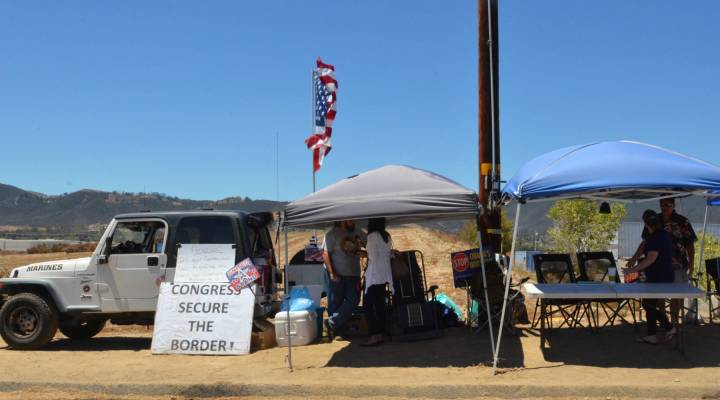 Of borders and businesses: moving forward in Murrieta

Of borders and businesses: moving forward in Murrieta

If you look online for “Murrieta, California” this is what you find: footage of demonstrators and counter-demonstrators chanting, waving American flags, and in at least one case, people spitting on each other.

But if you go to Murrieta, you also see a supportive business community that turns out for events like the ribbon cutting at a new family-owned Mexican restaurant, Mariscos Las Palmas.

About 30 business owners from the Murrieta Chamber of Commerce feast on ceviche and tostadas in the restaurant’s parking lot. Efrain Buenrostro Barrajas, the owner, won’t talk about the demonstrations. That’s because it’s an emotional issue in Murrietta, explains his son, Norbert Buenrostro.

“He just doesn’t want to send the wrong message to people, to customers, thinking he’s for it or against it. He is an immigrant, but we choose not to talk about it because it’s so sensitive,” says Buenrostro.

That’s the attitude of many business owners here: Stay out of the fray and promote a positive image of the city.

But economist John Husing, who studies the region where Murrieta is located, says he’s hearing something else from area business owners behind closed doors.

“They are looking at this as an absolute embarrassment for Murrieta. The best statement I heard made is: ‘You really don’t want to be in a place where people are spitting on each other.’ This was not good for business,” Husing says.

Murrieta is a relatively affluent city of just over 100,000 people. The Chamber of Commerce is aggressively trying to attract new jobs. Chamber President Patrick Ellis says, “It’s always a concern when something happens that paints a black eye on the city. And you have to do the best you can to get through it.”

Eleven days after the protests started, only a handful of people are left sitting under tarps outside the Border Patrol Station.  They have signs that say “Congress, Secure The Border” and “Immigrate Legally.”

Demonstrators in Murrieta on July 11, 2014 across from the Border Patrol station

John Henry, who is so keen to prove he’s from Murrieta that he displays his driver’s licence, says he is there because he is worried about immigrants.

“I’m out here today to show support for the border patrol guys and to also let the federal government know that we’re not going to let them use our small town as a refugee camp. And that they’re treating these people incorrectly,” says Henry.  “They need to be brought to a facility that can properly help them. The facility here only holds 25 people, and they’re putting 140 people into that area.”

Henry thinks the message of what he calls “the rallies,” has been distorted. He says things turned ugly in early July, thanks to outsiders coming in town. He’s sympathetic to business owners’ concerns, but he has his own economic worries.

“The majority of the people in this area – if you look at the demographics – that are unemployed are white males, ages 18 to 32,” Henry says, describing the demographic category he falls into.  “Finding work around here is very hard. Especially when we have thousands of people migrating through this area.”

For now, the buses have stopped coming in to the city. But immigration protests have sprung up in places like Oracle, Arizona, another town that may have to start thinking about its reputation.