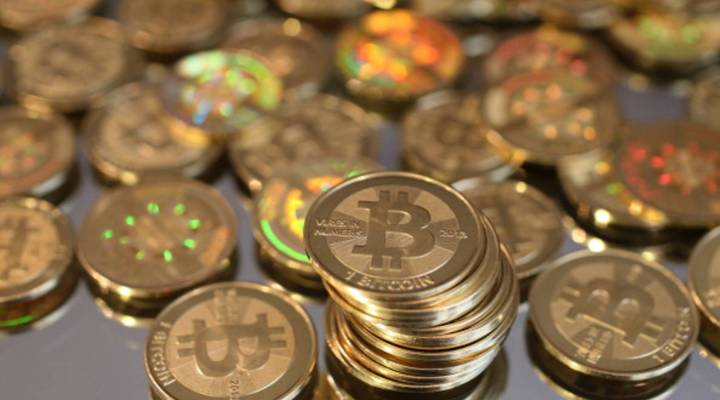 The IRS labels bitcoin an asset

COPY
A pile of Bitcoins are shown here after Software engineer Mike Caldwell minted them in his shop on April 26, 2013 in Sandy, Utah. George Frey/Getty Images

The IRS labels bitcoin an asset

A pile of Bitcoins are shown here after Software engineer Mike Caldwell minted them in his shop on April 26, 2013 in Sandy, Utah. George Frey/Getty Images
Listen Now

The Internal Revenue Service ruled today that Bitcoin would be treated like an asset for tax purposes. Here to explain what that really means is our New York editor, Paddy Hirsch, author of “Man vs Markets.”

What just happened?
As soon as bitcoin started to appreciate in value, the IRS decided it wanted a piece of the action. It needed to decide quickly, if wanted to collect taxes from bitcoin gains this tax season!

The question was, whether to tax it as a currency, or a commodity, or an asset. In other words, is bitcoin like a change-purse full of Euros (currency), or is it like a bar of gold (commodity), or it is like a load of company stock (asset).

What does that mean?
It means if you mine bitcoin, you’ll have to declare it as taxable income with a value equal to the worth of the Bitcoin on the day it was mined. Also, if you spend bitcoin, you may end up paying taxes on the value of the appreciation.

What does that really mean?
Say you have a dollar’s worth of bitcoin. Overnight bitcoin doubles in value – which isn’t outside the bounds of possibility, after all! Your local pub is offering a promotional IPA for two bucks. If the barkeep accepts your bitcoin for that beer, you will have to declare the capital gain on that dollar’s worth of bitcoin – which has, of course doubled in value.

So you get a beer, but you also get a tax bill.

But what if my bitcoin loses value?
Well then you can subtract that loss from your capital gains and your income.  Which is pretty cool.

Does this make bitcoin more accessible or more acceptable?
It makes it more acceptable to the IRS, certainly. But it doesn’t make things much different for the average person.  In fact, because the IRS has decided it’s not a currency, Bitcoin accounts aren’t likely to see the kind of regulatory protections that bank accounts receive, like FDIC insurance. But it is a sign that regulation is moving quickly to embrace Bitcoin … which is good for Bitcoin.