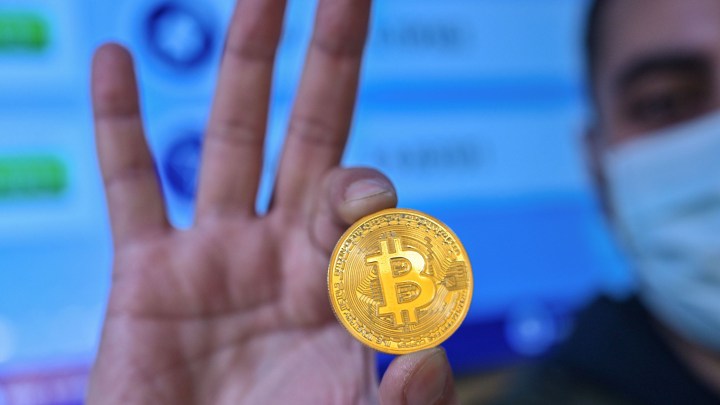 It been three years since the great Bitcoin crash that followed a cryptocurrency frenzy of 2017. These days, some Bitcoin fans think this has matured as an investment vehicle.

A Bitcoin is a store of value made up zeros and ones, which hit an all-time high of nearly $42,000 a week ago today. With ascent of this “digital asset” as things like Bitcoin or Ethereum are called, some deeper-pocketed people have been turning to their investment advisers and wondering if they might be able to sprinkle some of this in among their stocks, bonds and gold.

“There has been quite significant demand,” said Joel Revill with the investment firm Two Ocean Trust, which pushed for and now received legal and regulatory approval in its base in Wyoming to add digital assets to portfolios.

There are many cryptos, but right now Bitcoin is the star. Revill see two groups that want this stuff in their mix, starting with the Bitcoin super fans, who’ve been following its development all along.

That’s the “crypto native investor, someone who is well aware of the unique characteristics of say, Bitcoin, and has created their wealth by investing in Bitcoin, but has not really thought much about traditional wealth or estate management, or tax planning,” Revill said.

Beyond these folks, there are now also just wealthy investors, or the outfits representing wealthy families, “who are intrigued by the asset class, are dipping their toe in this for the first time, but they come with the expectations that they will have the same legal protections, and regulatory clarity, and trade execution, and reporting that they expect with investments in traditional assets,” Revill said.

Individuals can get just order Bitcoin if they have the money. But financial advisers and professional money managers generally haven’t been able to add Bitcoin to the portfolios they manage. It has to do with a 1940s law and third-party custodians.

“What we haven’t seen is sort of mainstream adoption by the banks and broker dealers, because of the lack of clarity thus far from their regulators,” Revill said.

But here’s the thing: Wyoming wants to attract this kind of business and has now passed a series of laws spelling out how to handle Bitcoin-style digital assets. The regulators there, Revill said, are also on board.

“Our firm Two Ocean Trust is based in the state of Wyoming and we recently received a letter from our regulator that has permitted us to provide qualified custody for both traditional and digital assets,” Revill said. “It was the first of its kind issued by a bank regulator.”

At the national level, the Securities and Exchange Commission is also considering ways to clarify these rules. In recent weeks, it sought feedback from financial professionals.

That’s the news, but to back up, why would non-tech-savvy investors be interested in Bitcoin at all? First, if inflation were to rise from the dead, by definition, traditional money drops in value. That’s Bitcoin as an inflation hedge.

Also, by design, there won’t be much more Bitcoin created and this limited supply might drive up its price. Lastly, Revill said, Bitcoin is also useful in new financial technology that emerges.

“Think of it as a replacement for global payment and settlement systems,” Revill said. “There are many significant advantages.”

That is, if the global laws and regulations that govern this world of digital assets allow these things to happen, or if some other technology doesn’t supplant it.