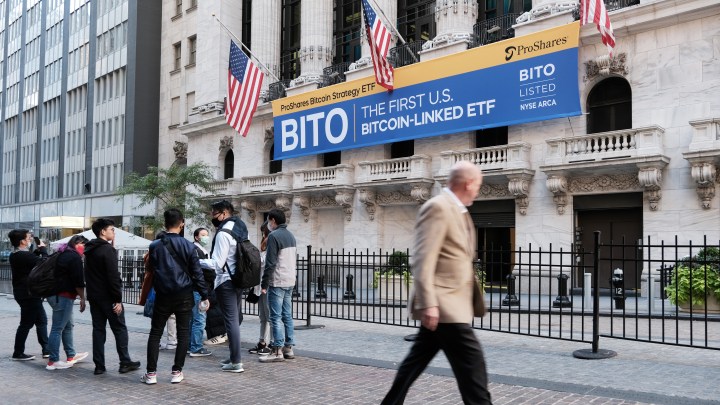 Cryptocurrencies hit a milestone Tuesday: An exchange-traded fund, or ETF, linked to bitcoin is now on the New York Stock Exchange.

It’s not actual bitcoin, but a financial asset derived from it that can be bought and sold by investors. The Securities and Exchange Commission quietly let it happen, which is a first.

The ticker is BITO — you can look it up on the New York Stock Exchange and buy it just like you could Tesla or Apple or whatever stock. But if you did buy it, “you would not actually be owning bitcoin. You would just be speculating on the price of bitcoin,” said James Angel, a professor of finance at Georgetown.

The point is, you can invest in bitcoin without buying a bitcoin. This is a big step in making cryptocurrency mainstream, said Simeon Hyman with ProShares, the firm that created the bitcoin ETF.

“The more participants in various pieces of this market, the more liquidity, transparency will be a part of the process as it matures and evolves,” he said.

Hyman said it’s also under government supervision. “The futures market is a regulated price,” he said.

That may draw a lot of interest from investors. Taxes are a little easier if you invest this way, and there’s no concern over your bitcoin wallet getting hacked, per Amy Wall, who represents taxpayers before the IRS.

“But it’s the fact that it’s now an ETF is going to make people think it’s safer. That’s, I guess, the concern I’ve got about it,” Wall said.

A fund might attract more investment from retirement accounts and pensions, but, she said, it’s still betting on bitcoin.

“It’s not less volatile. It’s just as volatile as it ever was, it’s just as up and down as it ever was. People still make and lose fortunes on a daily basis,” she said. “That is not different just because it’s an ETF.”

So, she said, don’t bet any more than you’re willing to lose. As of this afternoon, BITO had sold more than 20 million shares.