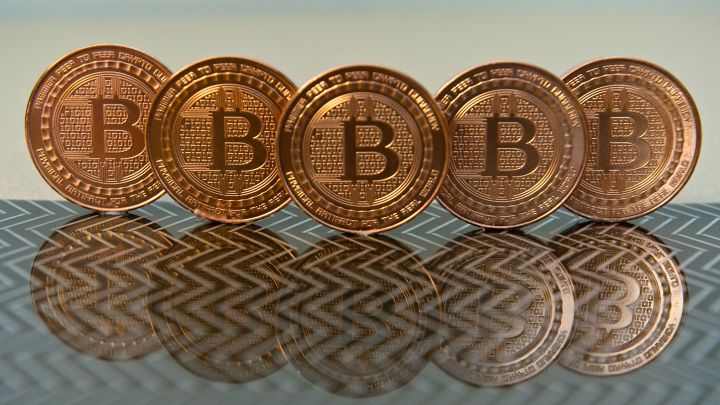 COPY
The value of cryptocurrencies like Bitcoin fluctuates, but a central bank-backed digital dollar would be worth ... a dollar. Karen Bleier/AFP via Getty Images

The value of cryptocurrencies like Bitcoin fluctuates, but a central bank-backed digital dollar would be worth ... a dollar. Karen Bleier/AFP via Getty Images
Listen Now

The Federal Reserve on Thursday dropped an announcement by Chair Jay Powell about a central bank digital currency — a digital dollar — for the U.S.

The Fed has been thinking about it and will continue to think about, he said, and this summer it will come out with a paper on the benefits and risks of doing so.

A central bank digital currency would be kind of like Bitcoin, minus the chaos and volatility.

“It would be issued and backed by the U.S. Federal Reserve,” said Jim Angel, who teaches at Georgetown’s McDonough School of business.

Bitcoin’s value changes by the second. A central bank digital dollar would always be … just a dollar.

“Imagine smart money,” Angel said. “Imagine programmable money. Imagine money you could send to your nephew, but he could only spend it on textbooks in college. Imagine being able to track what the charity did with the money you donated.”

About 80% of central banks worldwide are exploring a central bank digital currency, according to a report by Bison Trails. One basic question: What, exactly, would they do with it?

“Will they allow speculation or investment in the asset, or will they simply limit it to payments and payments alone?” asked Paul Grewal, the chief legal officer at Coinbase, which operates a cryptocurrency exchange platform.

Grewal said the other big question is how anonymous should this thing be?

David Treat, senior managing director at Accenture, said take paper money as a comparison. “If I’m at the corner store and I slide a $10 bill to the store owner, I’m not sharing any identity information in that transaction.”

A digital dollar could be just as anonymous but with legal exceptions. “With triggers that suddenly, identity information could be reported,” Treat said.

Different countries will come up with different rules and levels of privacy. China is a first mover in developing this kind of digital currency, said Jim Angel of Georgetown.

By contrast, Angel said, Europe is developing a version with certain privacy controls. If the U.S. wants the dollar to continue to be the world’s most useful currency, Angel said, it’ll have to catch up.