Spain’s skilled and affordable workers may turn the tide

Spain’s skilled and affordable workers may turn the tide

Spanish government figures out this week show that about 113-thousand Spaniards lost their jobs in January. Spain’s unemployment rate of 26 percent is higher than that of any European Union country except Greece. But the government says the economy is improving and the jobs picture will improve this year. The BBC’s Tom Burridge reports from Madrid that one advantage the country enjoys is a skilled and affordable workforce.

Antonio Molina is the CEO of a company called Advanced Medical Projects which tries to cure some of the rare and fatal genetic diseases that affect children. He set it up in 2009 at the height of Spain’s economic crisis. Back then, it wasn’t easy to get funding for a start-up and he had to apply to 69 banks before he got the necessary funds. Molina believes things are getting better and investor confidence is returning. He just secured 21 million Euros – about 28 million dollars – from a French-Swiss venture capital firm. Molina says start-ups based in Spain have an advantage because the scientists are highly-trained and they cost less than in the US or Germany where competition is greater.

Tech company boss Juan Cartagena agrees. He says the current difficult jobs market means that talent is available at a discount rate and there’s not as much competing demand as there would be in countries like the US, where the tech sector is much bigger than Spain’s. Cartagena says many bright people want to work for his firm Traity – a website that collates and analyzes social media activity – because it’s a challenge.

The Spanish government, meanwhile, has challenges of its own. It must make Spain more competitive and cement the economic recovery it says is in place. Professor Xavier Vives, a prominent Spanish economist from the SA Business School, says more investment is needed in innovation, in research and development and in education. He believes Spain can only be successful once it embraces radical structural reforms.

But European elections are taking place in May and few believe there will be reforms before then – or any significant improvement in Spain’s depressing jobs situation. 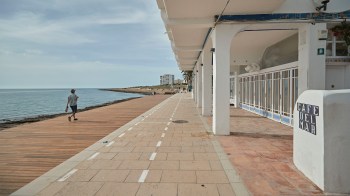